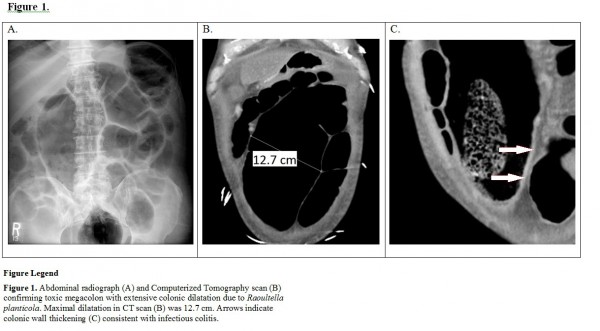 Raoultella planticola is a Gram-negative bacterium that has been a rare and relatively harmless cause of human infection. However, reports of severe gastrointestinal infections by R. planticola and drug-resistant strains have increased in recent years. We present a case of toxic megacolon caused by R. planticola associated with fish ingestion. A 69-year-old with a history of chronic constipation secondary to colonic redundancy cirrhosis was admitted to the hospital with severe diarrhea, hypotension and fever up to 38.2˚C. Admission blood cultures were positive for Gram-negative bacilli, later speciated as Raoultella planticola susceptible to all tested antibiotics except ampicillin. Serial abdominal radiographs revealed progressive severe colonic dilatation, and contrast enhanced abdominal CT showed extensive sigmoid colon dilatation reaching 12.7 cm, as well as colonic mucosal thickening consistent with infectious colitis. Laboratory tests revealed leukocytosis of 13,200/mm3, anemia and hypokalemia. Clinical data and imaging results sufficiently met criteria for a diagnosis of toxic megacolon (Jalan 1969). The patient was treated with a course of piperacillin/tazobactam with significant improvement. On further questioning, the patient recalled eating leftover fried fish of an unknown variety that was brought over by a neighbor the day that his symptoms started, and could recall no other sick contacts prior to hospitalization. This case indicates the increasing relevance of R. planticola as an emerging gastrointestinal infection and the utility for abdominal imaging in diagnosing toxic megacolon from infections not usually associated with it. Additional images available on request.