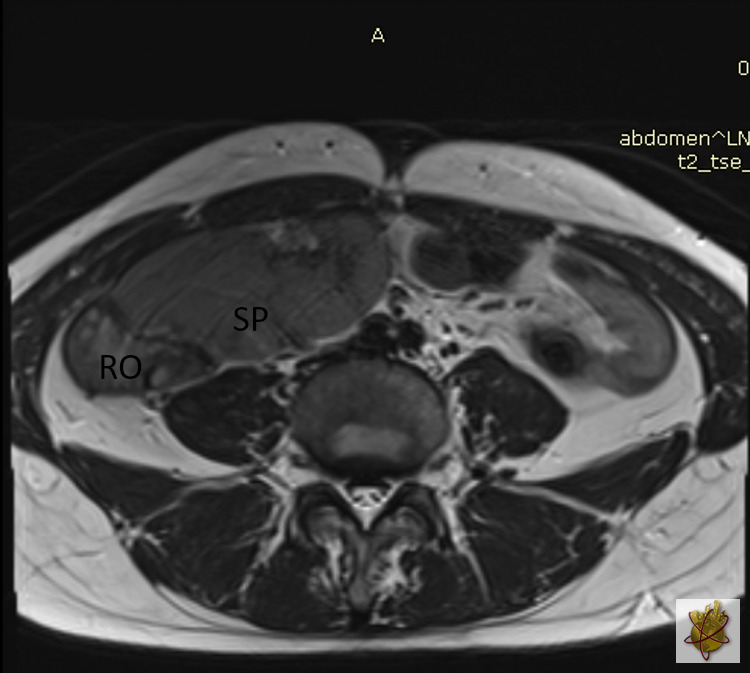 A 20 year old female patient presented with a lump in the abdomen since 3 years. Patient gave history of recurring bouts of pain abdomen requiring hospitalization. On examination the patient was stable and not in acute pain with stable vitals.

Ultrasonography of the abdomen revealed a well-defined hypoechoic lesion in the lower central abdomen with no obvious origin from any intrabdominal organ nonvisualisation of spleen in the left hypochondrium. The right ovary was seen high up and adjacent to this lesion. Contrast enhanced CT showed heterogenous enhancing mass lesion in central lower abdomen with Splenic vessels seen entering the lesion S/o of wandering spleen. There is eventeration of left hemidiaphragm with absence of spleen in left hypochondrium and its replacement by bowel loops. Right ovary was slightly bulky is seen adhered to the lesion with no intervening fat seen. Non contrast MRI confirmed the same findings as seen on CT.

As compared to previous imaging, the size of the lesion had reduced. the ovary was consistently high up seen adjacent to the splenic tissue. Patient was planned for splenectomy and prior consent for oophorectomy was obtained. Per-operatively the ovary was adherant to spleen only by flimsy adhesions and could be easily separated, and need not be removed. It was postulated that perisplenitis due to recurrent torsion resulted in this adherence in the present case. Wandering spleen is a rare entity characterized by its absence in its normal location in the left hypochondrium and presence of a long vascular pedicle by the virtue of which it is mobile and present in any intraabdominal locations or more commonly pelvis. It is particularly distinct from conditions like splenosis and accessory spleen. It occurs due to error in development of the normal supporting ligaments of spleen with absent or malformed gastrosplenic and splenorenal ligament. It is mostly congenital, but in some instances it may be acquired. It can occur in patient of either sex and age but most frequently in 20-40 years. Acquired cases are encountered in females of child bearing age group, it is also postulated that laxity of ligaments and abdominal walls during pregnancy may have a role in it. This condition may remain asymptomatic in large proportion of patients and may be detected incidentally on imaging. It attracts the physicians interest when it simulates a mass lesion. the other common manifestation is due to torsion and might be as an acute abdomen or as chronic dull aching pain as a result of congestion. The classical clinical triad described was i) a hard ovoid mass having a notched edge, ii)painless movement of the mass towards left upper abdomen, with movement in any other direction being painful and unpleasant and iii) resonant note on percussion of left upper abdomen. However this entity is rarely suspected clinically and hence overlooked. Another entity although very rare, restricted to isolated case reports is splenogonadal fusion. embroyologically the spleen develops close to the primordia of gonads and mesonephros, . It has been almost exclusively been reported in males and on left side with M:F= 15:1. A hypothesis for this male preponderance may be due to inaccessibility of female gonad to examination. In males it invariably is associated with undescended testes. Splenogonadal fusion is of 2 types according to Putschar and Manion classification :continuous and discontinuous

Recurrent torsion of wandering spleen is a rare but important differential diagnosis for patients presenting with acute abdomen. Radiologist is often the first to suggest the diagnosis of this condition. Splenogonadal fusion is an extremely rare association with the same, hence the location of the gonad should be sought for on the imaging 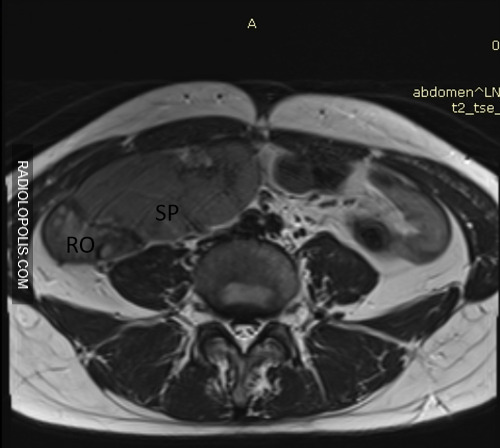 wandering spleen and its adherance

wandering spleen and adherance to ovary