An infratemporal mass : A diagnostic dilemma 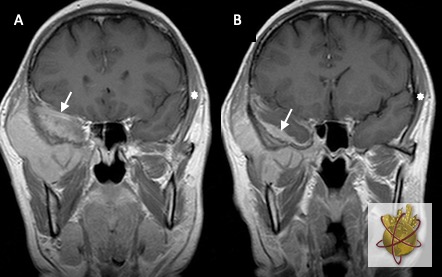 An infratemporal mass : A diagnostic dilemma

A 46-year-old male with a history of recurrent bilateral ear discharge presented with painless, progressively worsening right temporal swelling for over a year. There was no previous history of trauma. Examination revealed a 4 x 5cm, firm, non-tender, non-fluctuant, right temporal swelling. There was also subtotal perforation of the right tympanic membrane. Other otorhinolaryngological examinations were unremarkable. There was no hearing loss. Neurological and eye examinations were intact.

Magnetic resonance imaging (MRI) and Computed tomography (CT) of the neck were performed. MRI showed a homogenously enhancing, infiltrative right temporal mass, with a small intradural component. There is extension of the intradural tumour into the pterygopalatine fossa and foramen ovale (Figure 1, 2, 3). CT showed associated hyperostosis of the right sphenoid bone (Figure 4). Initial radiological impression was of an aggressive sphenoid wing soft tissue tumour with local infiltration. Tumour debulking was subsequently performed. Intraoperatively, there was fullness of the right temporal region. A whitish to pale tumour was seen overlying the right temporalis muscle and eroding into it with a preserved galea. The temporalis muscle as well as the tumour were then resected. No complications were encountered during the surgery. The patient recovered well with no new symptom or cranial nerve palsy. Histopathology of skeletal muscle showed presence of spindle-shaped cells and a few whorl formations, consistent with Fibrous Meningioma, WHO Grade 1 with involvement of the surgical resection margins (Figure 5). An MRI post surgery showed residual right temporal extracranial component. At time of writing, second stage of tumour debulking is not performed yet. Apart from occasional headaches, patient has no other complaints.

Meningiomas account for approximately 15-18% of all primary brain tumours. It originates from meningocytes or arachnoid cap cells, that line the meninges. Extracranial extension of meningioma is uncommon, occurring in up to 2% of meningiomas. It may involve the scalp, ear, temporal bone, sinonasal tract, orbit, the outer table of calvarium and the parotid-pterygoid region to name a few. These tumours pose significant diagnostic challenges owing to the presence of both intradural and extracranial components. Presentation typically reflects the anatomical site of involvement and due to mass effect from the extracranial component. Radiologically, meningiomas are avidly enhancing, extra-axial tumours with a broad dural base and adjacent hyperostosis. On CT, tumours are commonly isodense to the normal brain parenchyma. 20-30% may have some calcification. MRI shows tumour to be isointense to grey matter on T1 and T2-weighted images with avid and homogenous contrast enhancement. Both intradural and extradural components share similar radiological characteristics. Therefore, presence of both an extradural mass and an adjacent enhancing intradural component should raise the suspicion of an extracranial meningioma. In certain instances, as in ours, the bulk of the tumour is extracranial, with a minor intradural component. Surgical resection is the mainstay of treatment. However, complete resection of both the extradural and intradural components is challenging. A multidisciplinary approach is thus required, involving both neurosurgical and otorhinolaryngological expertise. Radiotherapy and radiofrequency ablation of large extracranial meningiomas can be used to reduce tumour bulk prior to surgery and to reduce symptoms in palliative cases. Several other entities may share similar radiological findings, mimicking meningiomas. Differentials for extracranial meningiomas include solitary fibrous tumour/hemangiopericytomas, dural metastases, primary dural lymphoma, neurosarcoidosis and and chondrosarcomas. 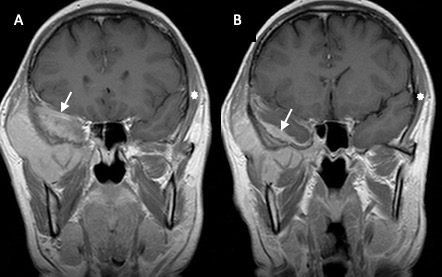 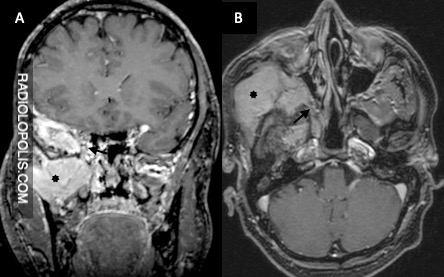 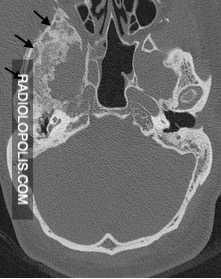