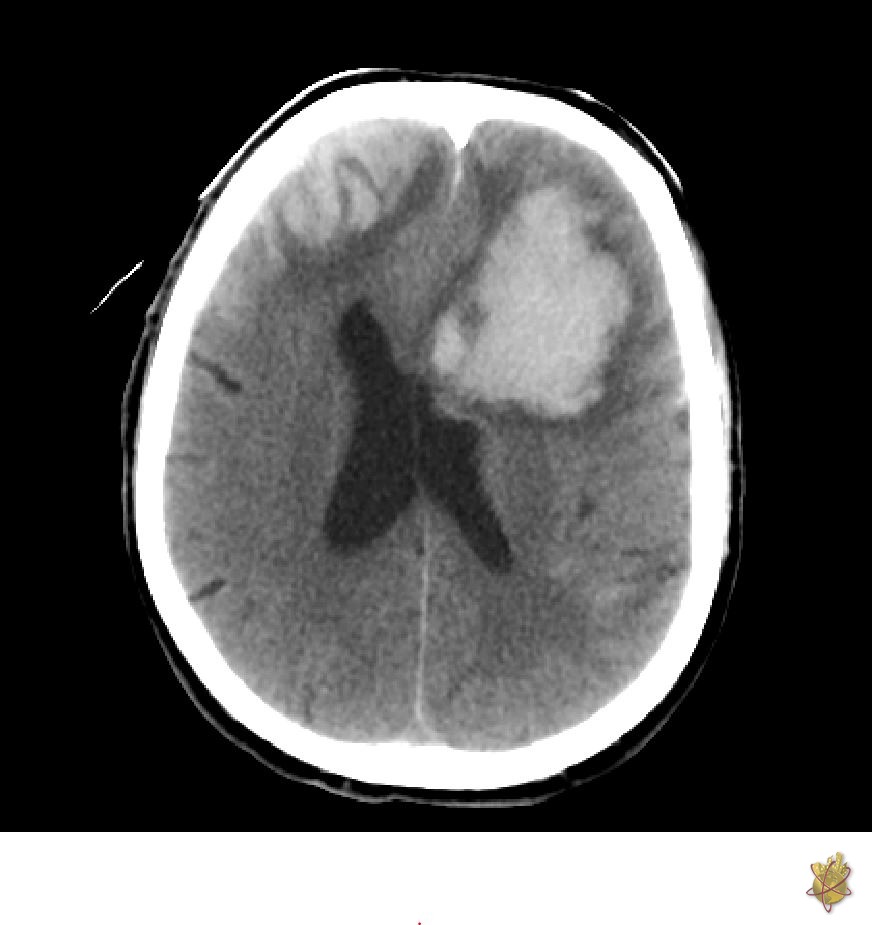 A 79 years-old male on bevacizumab treatment due to metastatic colon cancer to liver, lung and peritoneum, but no evidence of central nervous system involvement, developed aphasia, with no other changes in neurological examination. The patient had previously used Xeloda and Capecitabine in combination with BVZ and had no previous hematological disorder. The patient underwent a brain tomography (CT) and magnetic resonance imaging (MRI) that identified large acute parenchymal hematoma located in the left frontal lobe with significant edema and mass effect, with signs of a 1.2 cm contralateral subfalcine herniation. Another acute parenchymal hematoma was located in the right frontal lobe (image 1). In addition to intraparenchymal hematomas, there were signs of ventricular hemorrhage and the presence of a laminar subdural hematoma in the right occipital region. Extensive residual deposits of hemosiderin on the leptomeningeal surface in the posterior fossa structures raised the possibility of superficial siderosis. Measures to reduce edema and intracranial pressure were instituted. A single-time surgical resection was possible for both frontal lesions. The preoperative platelet count was 98.000, and surgery was then performed to drain the hematoma and the material was sent for anatomopathological analysis. Postoperatively, the patient had improvement of the neurological deficit (image 2). The pathological examination showed only the presence of hematoma, without signs of metastatic cells. The patient died 1 month later due to respiratory infection.

Nontraumatic (spontaneous) intraparenchymal hemorrhage (IPH) is the bleeding in the cerebral parenchyma that may or not extend to the ventricles and subarachnoid space. IPH accounts for 6.5% to 19.6% of stroke cases, and is associated with a higher mortality rate. Depending on the underlying cause, bleeding is classified as primary or secondary. Primary intracerebral hemorrhage originates from the spontaneous rupture of damaged small vessels and accounts for 78 to 88% of cases. Secondary hemorrhage is associated with vascular abnormalities or tumors. In patients with brain metastases, the risk of spontaneous bleeding varies greatly according to tumor histology, with significantly higher rates from melanoma and renal cell cancer metastases, compared to lung and breast metastases. Zuo et al performed a literature review with meta-analysis to characterize the impact of BVZ on the occurrence of cerebrovascular events in cancer patients, and demonstrated that BVZ was associated with a threefold higher risk of both ischemic and hemorrhagic cerebrovascular events, and the risk was proportional to the BVZ dose. Of the 17 randomized controlled trials that were analyzed, 8 reported central nervous system (CNS) bleeding. This study also showed that the risk of cerebrovascular events varies by tumor type. Metastatic colorectal cancer, present in our case, is the tumor associated with the highest risk of bleeding with the use of BVZ, a 6 times higher risk. Bevacizumab is also used to treat primary CNS tumors such as recurrent GBM and WHO grade III tumors following treatment with radiotherapy and temozolamide. Narita reviewed the efficacy and side effects of BVZ therapy for GBM and other brain tumors, and the most common side effect was hypertension, a known risk factor for vascular events such as IPH10. However, Yang et al, in another meta-analysis, found no significant difference in the risk of intracranial hemorrhage in patients treated with BVZ for solid tumors and brain metastases compared with those not received BVZ. Khasraw et al also reported that there was no difference in the incidence of IPH between patients with brain tumors who received BVZ and those who did not. Thus, BVZ does not appear to increase the incidence of HIP compared to the natural incidence of gliomas or brain metastases. It is supposed that several mechanisms may be involved in predisposition to cerebrovascular events after inhibition of VEGF signaling. VEGF promotes endothelial cell proliferation and stimulates their survival. Inhibition of VEGF could thus impair the regenerative capacity of the vessel wall, causing thrombosis or bleeding. VEGF also plays a role in vascular protection, with anti-apoptotic, anti-inflammatory, and cell pro-survival effects. Another mechanism involved is increased production of nitric oxide (NO) and prostacyclin by VEGF. Reduction of NO and prostacyclin may predispose to thromboembolic events. In addition, bevacizumab significantly increases the ri 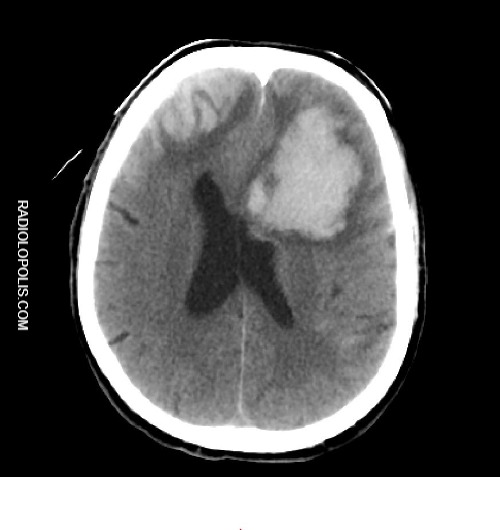 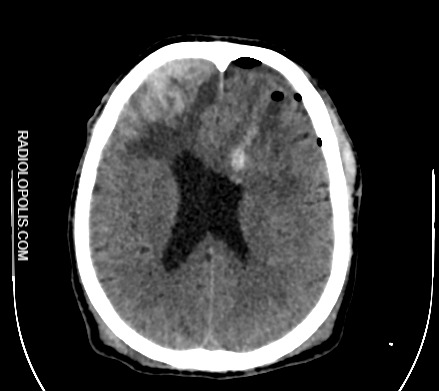