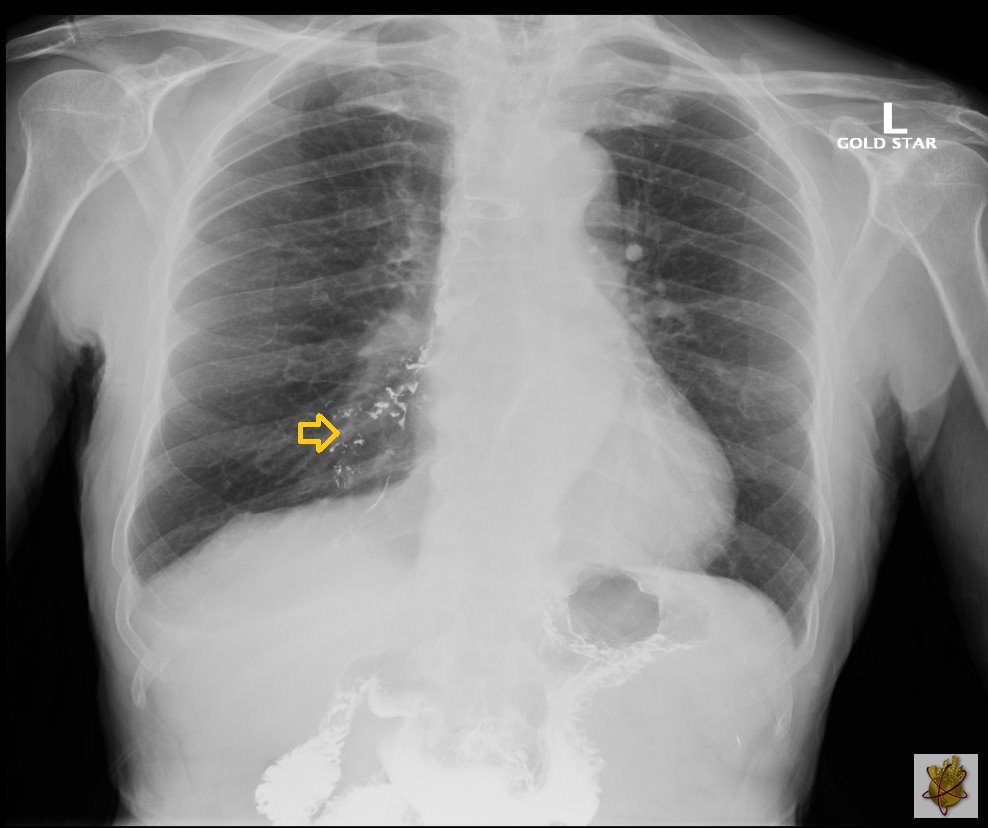 An 86 year old male retired factory tool maker was referred to the Community Respiratory Service with a two years’ history of productive cough of clear sputum. He was an ex-smoker of 10 years and previously accumulated a 50 pack year smoking history. He had a cerebrovascular accident (CVA) 2 years ago but recovered without significant neurological deficit. At the time of his CVA, he underwent a barium swallow which demonstrated evidence of aspiration an this was confirmed by a plain chest radiograph (Figure 1). He was advised by the speech and language specialist to adhere to a thickened diet. The cough was worse in the evening and 5 to 10 minutes after he had eaten. However, his symptoms were not made worse when he was in the recumbent position. His symptoms resulted in him always carrying around a pocketful of tissues. His exercise tolerance was unlimited and denied any history of post-nasal drip or reflux symptoms. He confirmed good adherence to the thickened diet. Clinical examination was unremarkable with the exception of a mild dysarthria. His spirometry was normal and a CT chest scan was organised to investigate his symptoms The CT chest scan demonstrated residual barium contrast within the middle lobe (Figure2) and this corresponded to the area of barium aspiration from 2 years before. No other structural lung abnormalities were identified. The patient has been referred back to the speech and language service for a further opinion.

This patient’ symptoms dated back to his CVA. He previously had a barium swallow where there was compelling evidence of aspiration. The barium contrast persisted within his lung and was evidently demonstrated in his CT chest scan two years later. His cough was best explained by low volume aspiration. Fortunately, he had not had any chest infections during this period. Barium sulfate is a heavy inorganic metal, used as a contrast agent to enhance the visualization of the gastrointestinal tract by increasing the absorption of X-rays. It does not have any pharmacological activity and is neither absorbed nor metabolised by the body. It is excreted unchanged in the faeces. As it is believed to be an inert substance, it does not cause any inflammatory changes in the tracheobronchial tree if aspirated. However, severe hypoxia, acute respiratory distress syndrome (ARDS), and even death can happen in selected cases and can usually be attributed to factors including but not limited to simultaneous aspiration of gastric contents, anaphylactic reaction, and high-volume aspiration.2-8 High-volume barium sulfate can cause airflow obstruction due to its viscosity and the limited ability of the lungs to clear themselves. Its presence in the airspace also interferes with the gaseous exchange and causes ventilation-perfusion (V/Q) mismatch leading to hypoxemia, pneumonia, ARDS, and respiratory failure.1 Barium sulfate aspiration into the lungs can also have long-term sequelae like pulmonary fibrosis and bronchial granuloma.9,10 The severity of the airflow obstruction and respiratory complications mostly depends on the amount of barium swallowed. The normal recommended barium concentration is usually around 100 g barium sulfate in every 100 mL of preparation. Postural techniques (eg, lying on the side, rotating the head, moving the head downward so the chin touches the neck) may minimize the risk of aspiration during oral administration of barium sulfate.11 Currently published case reports demonstrate acute presentation of barium aspiration. In this case we highlight importance of reviewing previous radiological investigations in order to avoid unnecessary investigations as well as demonstrating that barium once aspirated causes persistent changes of the bronchial tree. 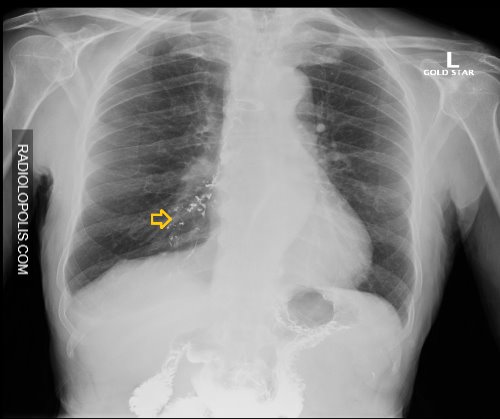 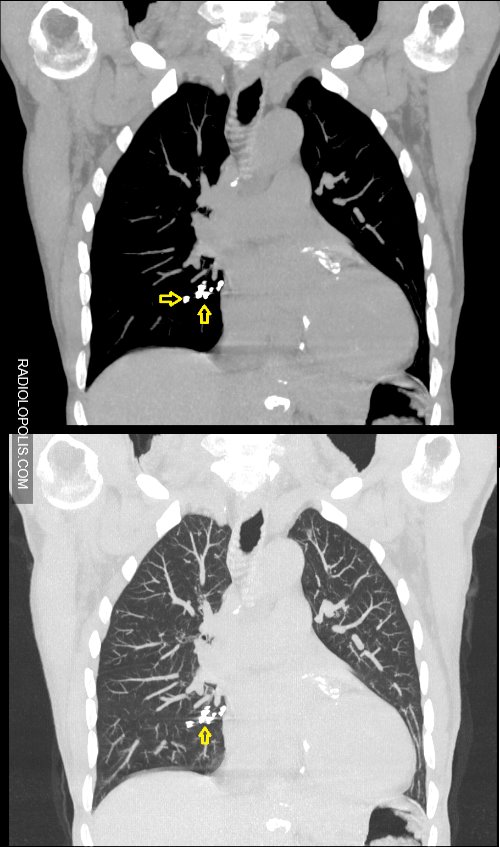