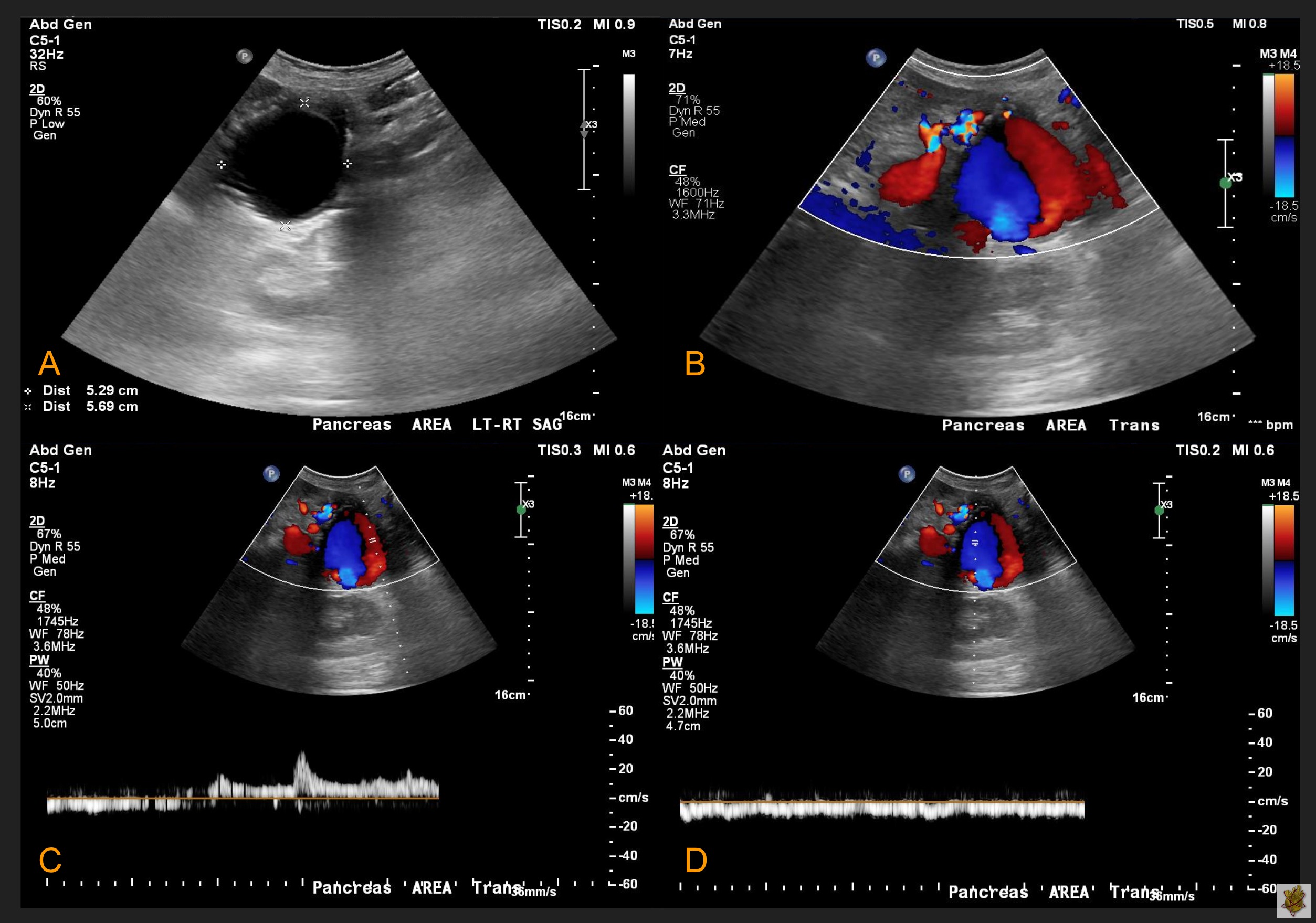 A 69-year-old female with a history of alcohol abuse and chronic pancreatitis presented to the emergency room with diaphoresis and pallor. On initial evaluation, blood pressure was 81/47 mmHg, heart rate 140 beats per minute, and hemoglobin 7.3 grams/deciliter. Shortly following admission to the intensive care unit, she suffered a bout of hematemesis. Enteric tube aspiration revealed coffee-ground emesis and emergent upper endoscopy showed multiple clean-based duodenal ulcers with no source of active bleeding. Two days later, the patient developed large amounts of melanotic stool and had another episode of hematemesis. Non-contrast CT (Figures 1A, 1B, and 1C) identified pancreatic calcifications consistent with chronic pancreatitis and a well-circumscribed hypodensity occupying the expected location of the pancreatic tail. Contrast-enhanced CT (Figures 1D, 1E, and 1F) demonstrated arterial phase enhancement of the lesion with a focus of contrast blush posteriorly suggesting active hemorrhage. Ultrasound depicted the classically described yin-yang sign with a to-and-fro color flow pattern (Figure 2) of pseudoaneurysm [1]. In the Interventional Radiology Suite, a conventional angiogram and diagnostic celiac arteriogram (Figure 3) confirmed the pseudoaneurysm arising from the splenic artery. The splenic artery distal to the aneurysm was cannulated with a 2.4 French microcatheter. Two detachable coils (4 mm x 13 cm and 3 mm x 8 cm) were deployed within it (Figure 4). Following this, the pseudoaneurysm was accessed (Figure 5a), into which 8 additional coils were deployed (four 20 mm x 40 cm, three 16mm x 39cm, and one 18 mm x 36 cm). Further detachable coil placement was attempted to achieve maximal packing density, however, efforts were abandoned given significant tension within the coaxial catheter system. The microcatheter was then retracted to the neck of the pseudoaneurysm, and a coil was deployed from the aneurysm sac across the neck into the narrowed/irregular pre aneurysmal splenic artery. Three additional microcoils were deployed into the inflow proximal splenic artery (4 mm x 13 cm). Post embolization angiogram of the celiac artery demonstrated no flow into the splenic artery or pseudoaneurysm sac (Figure 5b).

Splenic artery pseudoaneurysm formation can occur as a sequela of pancreatitis, trauma, procedural intervention, and peptic ulcer disease [2]. A common life-threatening complication of pseudoaneurysm is massive hemorrhage secondary to rupture, which can occur into any adjacent structures such as the bowel, biliary system, thorax, peritoneum, or the spleen [3]. Given clinical symptoms of upper GI bleeding, the final presumed diagnosis in our case was hemosuccus pancreaticus--hemorrhage from the pancreatic duct into the GI tract-- secondary to pseudoaneurysm rupture. Pseudoaneurysm refers to an arterial wall injury and resulting communication of arterial-pressure blood with an adjacent sac. The sac-like structure can be contained by the arterial media, adventitia, or simply the surrounding soft tissue structures [3]. Pancreatitis is the most common underlying cause of splenic artery pseudoaneurysm, the leading proposed mechanism being pancreatic enzyme autodigestion of surrounding vasculature [4]. Other less common etiologies include trauma, iatrogenic etiologies such as ERCP, surgery, percutaneous biopsy or drainage, and peptic ulcer disease [2, 3]. Mortality associated with the rupture of pseudoaneurysms approaches 100% [5]. On CT angiography, splenic artery pseudoaneurysms appear as a focus of contained active hemorrhage which follows the blood pool in density and remains contained on delayed phases [3]. Conventional digital subtraction angiography provides confirmation and allows real-time visualization contrast extravasation and collateral blood supply. Hemosuccus pancreaticus is a rare phenomenon, representing only approximately 1/1500 cases of gastrointestinal bleeding [6], but carries an approximate 90% mortality rate with supportive therapy alone [7]. CT angiography is useful in identifying culprit pseudoaneurysms and pseudocysts, and can also rarely demonstrate hyperdense blood products in the pancreatic duct. If clinically indicated, ERCP can provide a definitive diagnosis with direct visualization of blood products exiting the ampulla of Vater. Upper endoscopy was unrevealing in our case, unfortunately, perhaps because a sidescope was not used per the gastroenterologist. Significant decrease in morbidity and mortality has been shown with transcatheter embolization of pseudoaneurysms as opposed to traditional surgical techniques [8, 9]. Several endovascular techniques are described, the most common methods being coil embolization or treatment with catheter-directed embolic material. In cases where extensive collateral blood supply is present, a “sandwich” coil embolization method is preferred in order to prevent continued retrograde flow to the pseudoaneurysm which could result in the continued growth and contribute to the risk of rupture. The afferent and efferent blood supplied are embolized, with or without embolization of the lesion itself. In contrast, a pseudoaneurysm in an expendable end artery may be tr

Splenic artery pseudoaneurysm is identified on cross-sectional imaging as a contained focus of contrast extravasation and on ultrasound as the classical yin-yang flow appearance with a “to-and-fro” doppler waveform. Pseudoaneurysm rupture is a life-threatening complication with an extremely high mortality rate. Hemosuccus pancreaticus is a term used to describe hemorrhage from the pancreatic duct into the duodenum via the ampulla. 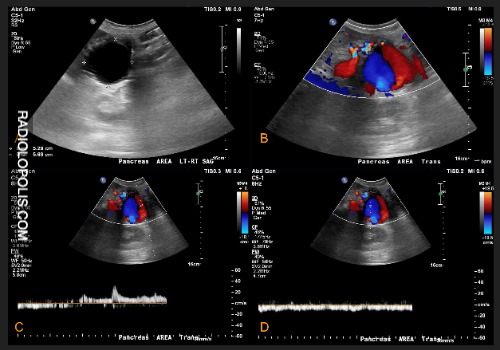 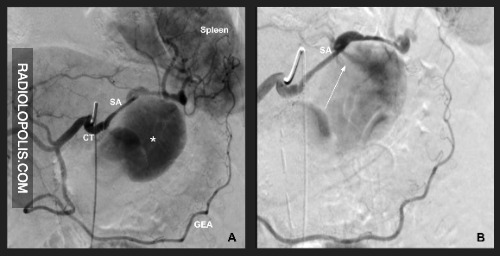 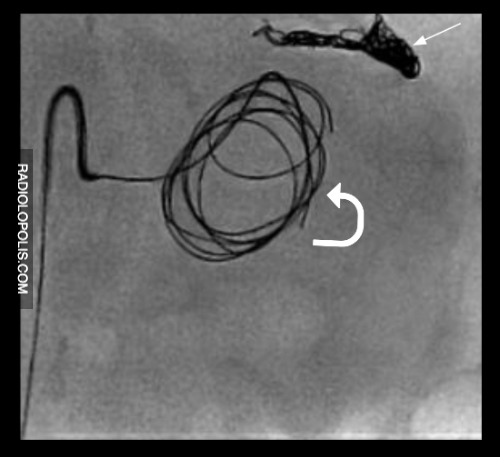 Figure 4. Angiogram and embolization of pseudaneurysm of the splenic artery 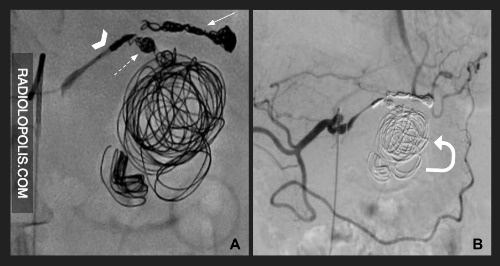