A 62-year-old female with history of an asymptomatic right renal artery aneurysm (RAA) that was discovered incidentally 10 years prior was found to have enlargement of the aneurysm (1.9cm to 2.7cm) on a repeat surveillance CT scan, and presented for elective aneurysm embolization.

Pre-procedural abdominal CT angiography revealed a wide-necked 2.7cm x 1.5cm aneurysm arising just distal to the first division of the right renal artery with a 5.1mm inflow vessel and a 4.2mm dominant outflow vessel exiting inferior-posteriorly (Fig. 1). Several smaller outflow vessels from the aneurysm sac were also noted (Fig. 1). Due to the wide-necked anatomy of the RAA, the angle between the inflow and outflow vessels, and the significant renal parenchymal supply from the dominant outflow vessel, placement of a flow-diverting stent, in addition to coil embolization, was performed [Fig. 2-4]. Completion angiography of the right renal artery showed cessation of flow into the aneurysm sac with patent flow through the PED and continued perfusion of the entire renal parenchyma (Fig. 4). One-month follow-up MRA reveals no residual aneurysm, preserved right renal venous outflow, and no evidence of renal infarct or other post embolization complication (Fig. 5).

Etiology and Demographics: RAA is a rare clinical finding seen in less than 0.1% of autopsies and 0.3-2.5% of imaging studies, and is generally found incidentally during workup of a secondary abdominal condition. The etiology of RAA is often idiopathic, but frequently associated comorbidities include hypertension, fibromuscular dysplasia, hypercholesterolemia, smoking, and connective tissue disorders (i.e, Ehlers-Danlos, Marfan syndrome). RAAs are most commonly discovered during the 5th-6th decade of life, and is seen predominantly in women. Clinical and Imaging Findings: Most patients with RAA are asymptomatic without notable physical exam findings, while 4-23% of patients experience symptoms such as flank pain, hematuria, or abdominal pain—rarely, a renal bruit or abdominal mass may be appreciated. RAAs are most often diagnosed through CT angiography, appearing as an outpouching along the renal artery [5]; less commonly used imaging modalities include non-contrast CT, MR angiography, and doppler ultrasonography. Most incidences of RAA present unilaterally, most commonly at the bifurcation of the main renal artery; 10-20% of cases are bilateral, and approximately 15% of cases are associated with extra-renal aneurysms, the most common ones being AAA and splenic artery aneurysm. Treatment and Prognosis: Appropriate management of RAA aims to relieve symptoms and prevent aneurysm rupture, a clinically catastrophic sequela which occurs in an estimated 0.3-3% of patients. Due to the rarity of RAA, there are not definitive criteria for interventional treatment. Currently accepted indications for intervention include aneurysm size greater than 2 cm, aneurysm in women of childbearing age (believed to be associated with a higher rate of rupture secondary to increased vascular flow and hormonal changes), and symptoms such as pain, hematuria, medically refractory HTN, thromboembolism, dissection, or rupture. While RAA > 2.0cm meet the accepted indications for intervention, some patients may still elect for conservative management. A 2015 multi-institutional study reviewed 865 cases of RAA, including 88 patients with RAA between 2-3cm that were managed nonoperatively, and found no cases of rupture in aneurysms of this size (mean follow-up 29 months) and no significant difference in growth rate between aneurysms > 2.0cm and smaller ones. However, all incidents of rupture recorded in this study occurred in aneurysms > 3.0cm, occurring at an 18% rate (3/17 total cases). The RAA in our case was approaching 3.0cm and had shown interval growth. In collaboration with the patient and her primary physician, we elected for intervention over continued surveillance. Patients who elect for interventional treatment of RAA historically underwent open repair; however, minimally invasive endovascular procedures, include stent graft placement and coil embolization, have become increasingly popular in recent years. Studies comparing outcomes in open vs endov

-Renal artery aneurysms >2.0cm may be treated safely and efficaciously with endovascular methods to avoid the risk of aneurysm rupture. -Flow diverting stents, such as the Pipeline Embolization Device, can be a useful adjunct for renal-sparing aneurysm embolization in cases with complex and tortuous renovascular anatomy. 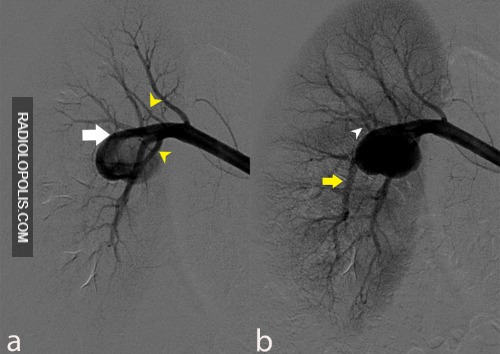 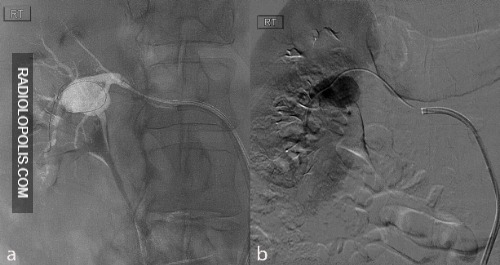 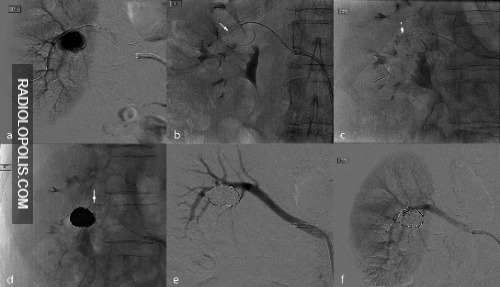