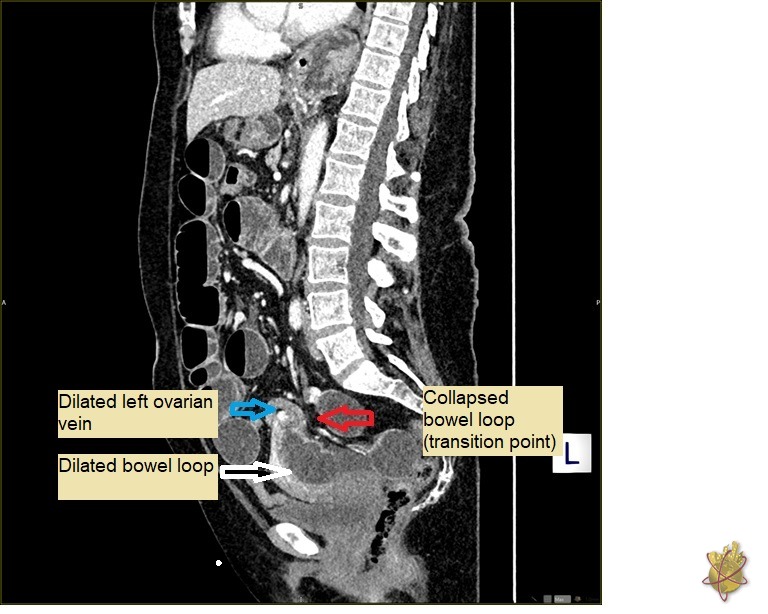 A 74 year old previously healthy female with a virgin abdomen presented with a history of intermittent colicky abdominal pain, nausea, constipation and bloating of 3 days duration. Physical examination revealed a distended abdomen with mild tenderness on deep palpation in the lower abdomen. There was no evidence of external abdominal or pelvic herniae. She had raised white cell count and CRP (C-reactive protein) with a normal serum lactate. Contrast enhanced CT scan of the abdomen and pelvis reported dilated small bowel loops with a transition point on the left side of the pelvis and this was associated with a tiny amount of fluid in the pelvis.

She underwent emergency laparotomy which demonstrated internal herniation of approximately 25 cm of distal ileumthrough a 3 cm defect in the mesosalpinx of the left broad ligament. The herniated bowel loop showed multiple patches of gangrene with a couple of sealed micro perforations. The constricting ring was released by dividing the edge of the defect along the round ligament. Resection of the gangrenous ileal loop with primary anastomosis was performed. Left salpingo-oophorectomy was performed by the gynaecologist to eliminate the cause. She made an uneventful recovery.

Post-Surgery the CT scan of the abdomen and pelvis was reviewed in detail retrospectively. In addition to features described above, the dilated small bowel loops were found between the uterus and the broad ligament with collapsed distal ileum. The left ovarian vein was very prominent and distended down to the level of junction of distended and collapsed bowel loops with normal pelvic veins. Preoperative diagnosis of such a case is extremely difficult and features are often non-specific but awareness of the condition and a careful interpretation of the CT scan may increase the likelihood of preoperative diagnosis. Characteristics of internal herniation are closed loop intestinal obstruction with proximal and distal transition points and displacement of anatomical structures. Early diagnosis and urgent operative treatment is essential to avoid intestinal ischaemia and hence reduce morbidity and mortality. Axial CT scan combined with coronal reconstructions demonstrates the closed ileal loop obstruction with transition points lateral to the uterus and a significantly dilated ipsilateral ovarian vein up to the level of hernia defect with no evidence of dilated pelvic veins.

Multiparous females with a virgin abdomen with no obvious external hernia presenting with features of acute intestinal obstruction should be evaluated for internal hernia through the broad ligament on routine imaging. Indeed this should be included in the differential diagnosis of all cases of intestinal obstruction. Typical features of closed loop obstruction along with displacement of anatomic structures with dilated ipsilateral gonadal vein should be scrutinised on cross sectional imaging preoperatively 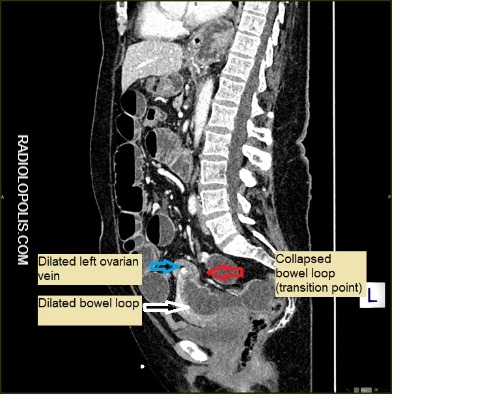 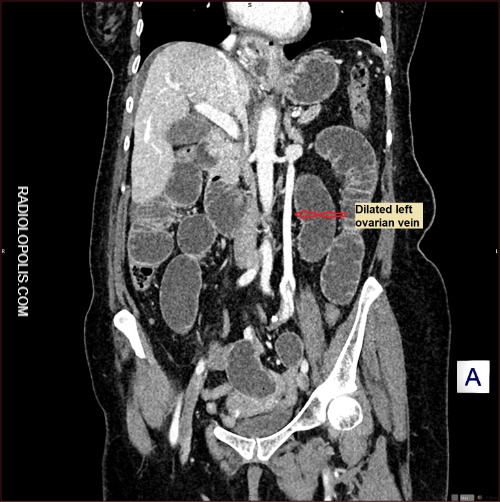