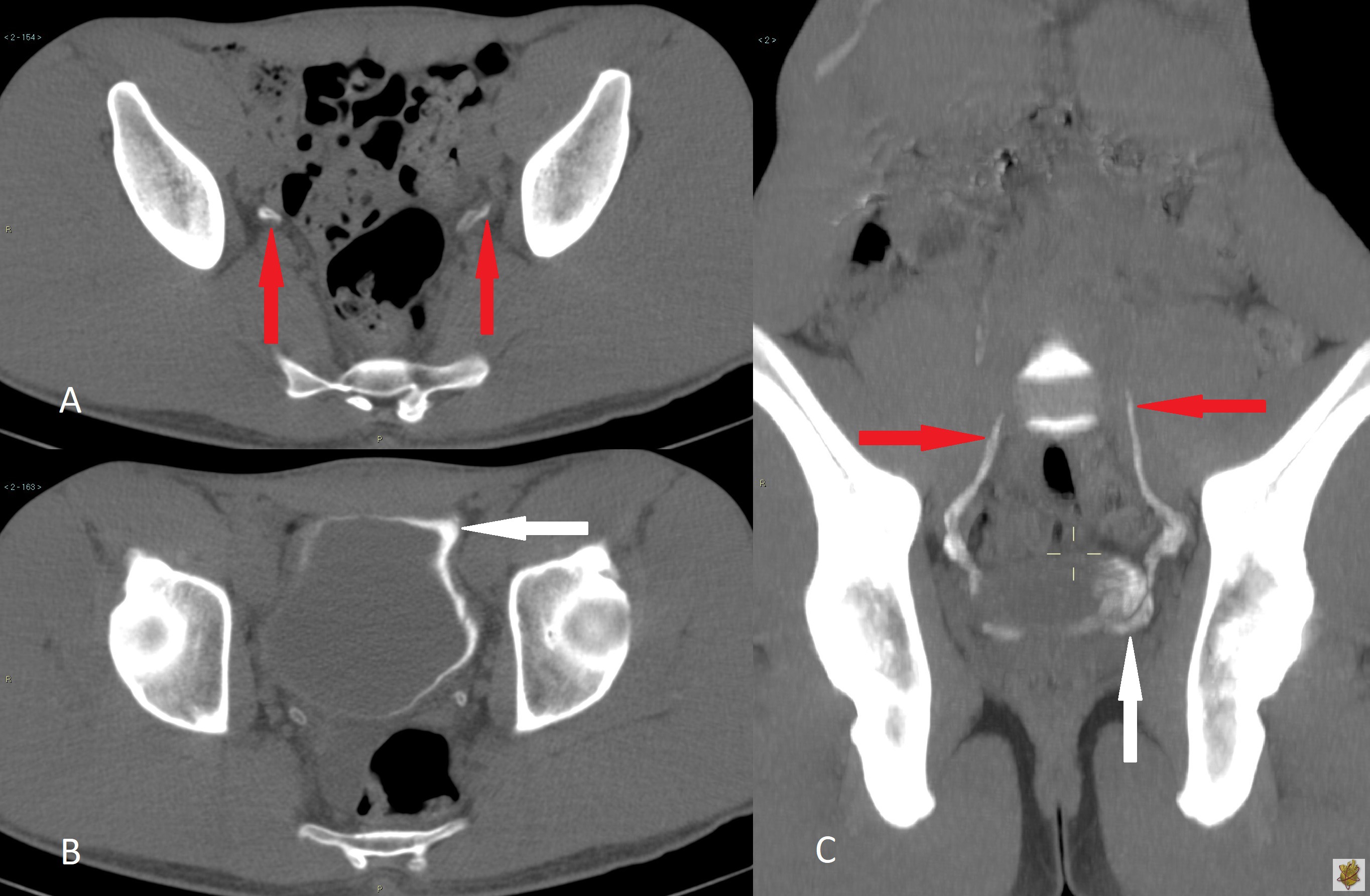 We present two cases with radiological features compatible with chronic genitourinary Schistosomiasis, both found in patients who have recently immigrated to Italy and come from sub-Saharan African regions. The first patient presents to the emergency room for urinary burns on urination, dysuria and occasional suprapubic pain. A CT urography is performed for suspicion of urinary lithiasis which demonstrates extensive calcifications of the bladder walls, ureteral walls, and umbilicovesical fascia associated with multifocal narrowing of the ureteral lumen in the urographic phase. After discharge from the emergency room, the patient abandoned the diagnostic-therapeutic path. The second patient comes to the emergency room for bilateral suprapubic and paravertebral pain associated with vomiting. An abdominal radiograph and a basal CT are performed on suspicion of lithiasis which demonstrate extensive calcification of the bladder walls and lumbar ureters. The uroparasitological and serological tests for Schistosomiasis are negative. Even this patient, after resolution of the painful phase, abandons the therapeutic diagnostic process.

Schistosomiasis is one of the most important neglected tropical diseases, affecting over 258 million people in 78 countries and causing 3.3 million disability-adjusted life-years. In sub-Saharan Africa, where around 90% of the global cases occur, approximately 300.000 deaths annually have been estimated to be caused by schistosomiasis.Genitourinary tract infection is caused by the Schistosoma haematobium species.The chronic form is due to granulomatous reactions to eggs deposited in the target organs. This leads to the deposition of fibrotic materials, causing the development of significant pathology in the affected organs. The chronic form may present clinically with gastrointestinal, hepatic, neurologic, or genitourinary symptoms. S. Haematobium infection on the other hand can induce pathology in the urinary tract leading to obstruction (hydronephrosis), hematuria, and in a significant number of cases, development of urinary bladder carcinoma. The most typical symptom is hematuria, which in endemic areas is very common among children. Secondary bacterial infections and bladder stones may develop and exacerbate the symptoms. The hematuria usually disappears after the age of 12 to 15 years, but the lesions may evolve to fibrosis or calcification of the bladder and lower ureters, unilateral or bilateral hydroureters, and hydronephrosis [4C]. Urinary schistosomiasis may present also with dysuria, lower abdominal pain, haematospermia, infertility, or a history of vaginal or vulvar lesions. Abdominal or pelvic tenderness can often be detected. In women, pelvic examination may demonstrate ulceration of the vulvar skin, vaginal or cervical surfaces. In men, rectal examination may reveal prostate mass or tenderness.Ureteral involvement in schistosomiasis has been reported in as many as 65% of cases. The earliest change visible at urography is persistent filling of the distal ureteral segment of the ureter, followed by distal ureteral dilatation. Early-stage ureteral dilatation results from ureteral dysfunction, not tissue damage. At a later stage, ureteral fibrosis resulting from tissue healing may lead to ureteral strictures. The fine ureteral calcification is visible as a linear or parallel linear pattern on radiographs and as a circular pattern on axial CT images. These radiologic imaging findings are considered pathognomonic.In the early stages of schistosomal infection, the bladder outline becomes hazy and ill defined at urography because of submucosal edema and pseudotubercles. The bladder wall becomes thickened and ulcerated. Schistosomiasis is the most common cause of bladder wall calcification in regions where S haematobium is endemic; it accounts for as many as 56% of cases of such calcification.

Genitourinary schistosomiasis is produced by Schistosoma haematobium, endemic to Africa and the Middle East. In early stages, it primarily involves bladder and ureters while later kidneys and genital organs. Clinical manifestations and radiologic imaging features also may be suggestive of the disease, even at an early stage: hematuria, dysuria, and hemospermia. At imaging, fine ureteral calcifications that appear as a line or parallel lines on abdominopelvic radiographs and as a circular pattern on axial images from computed tomography are considered pathognomonic of early-stage schistosomiasis. Ureteritis, pyelitis, and cystitis cystica, conditions that are characterized by air bubble–like filling defects representing ova deposited in the ureter and bladder, respectively, may be seen at intravenous urography and CT urography. Coarse calcification, fibrosis, and strictures are signs of chronic or late-stage schistosomiasis. 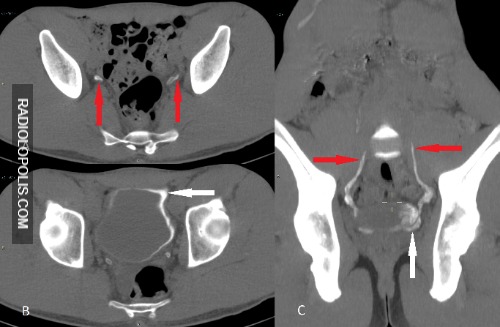