Complete spectrum of craniospinal CT and MRI features of Neurofibromatosis type 2 in a young adult.

A 22 year old male presented to neurology department with chief complaints of gradually progressive weakness in all the four limbs since the past nine months. The strength in upper limbs had diminished enough to limit writing. The ability to walk was severely impaired along with progressive loss of balance and repeated episodes of falling while standing still.No focal neurologic deficit was present. The skin of the back revealed atleast three small geographic pigmented macules resembling café-au-lait spots. MRI revealed two lobulated, strongly enhancing, extra-axial masses in the cerebello-pontine angles with mass effect on the middle cerebellar peduncles and cerebellum and extension into the internal auditory canals (with their consequent widening as seen on CT). These features are pathognomonic for vestibular schwannomas. A small hyperdense, partially calcified, heterogeneously enhancing lesion was seen projecting in the suprasellar cistern with broad base towards the basifrontal cortex suggestive of extra-axial origin. These features are characteristic of meningioma. MRI of the spine revealed an expansile, long segment (cervicomedullary junction to D4 segment) intramedullary spinal cord tumor with areas of hemorrhage, cysts and enhancing central solid components within it. These features are diagnostic of ependymoma of the cervicodorsal spinal cord. These features when viewed as a whole complete the diagnosis of neurofibromatosis type 2. 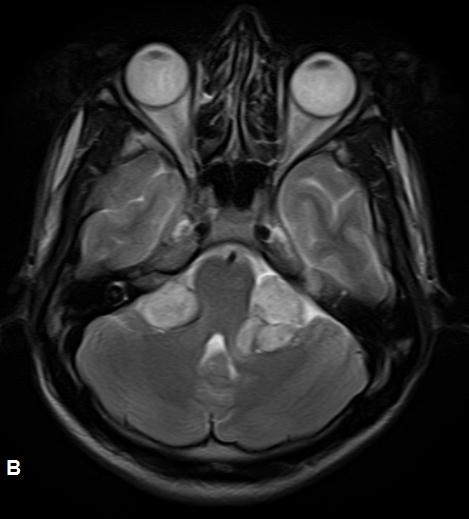