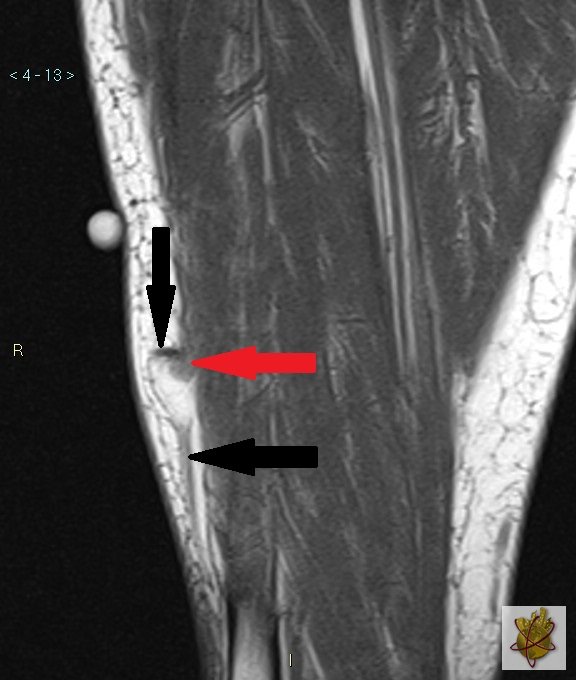 A 58 year old woman with a tender, slowly enlarging subcutaneous mass on her lower left lateral leg developed over last 6 months, was admitted to our institute in order to perform a MRI exam. Her primary complaint was numbness in the lower lateral leg and foot associated to mild degree of hyperalgesia that increased with standing, walking, activity and leg dorsiflexion. No associated recent history of trauma, infection or overly exertional activities were reported; the patient reported only that she started taking long walks in the hills the months preceding the development of this finding, without however reporting significant physical efforts. Physical examination revealed a soft, mildly tender, non-reducible fusiform subcutaneous thickening (longitudinal extension 45mm) on the lateral left lower extremity with occasional paresthesia irradiated to the dorsum of the foot; Tinel’s test was positive.

An ultrasound exam was not carried out and a direct MRI request was done by the family doctor in order to rule out a small parts tumor. MRI (Siemens Magnetom Avanto 1,5T Erlangen, Germany) was performed with a dedicate knee coil with the leg in a mild forced dorsiflexion. Basal sequences were obtained in three standard planes T1w-T2w-PDw fat saturation and an axial T1w fat saturation sequence completed the exam after contrast administration. MRI demonstrated a focal 5mm contour bulging of the peroneus brevis muscle with the same MRI features of the muscle itself, and was interpreted to most likely represent a fascial defect with muscle herniation associated to a little adipose lobulation. This complex measured on the whole 19mm x 9mm x 18mm and determined mild compression and dislocation of the superficial peroneal nerve (SPN) just caudally the site where the nerve perforates the deep fascial layer and becomes subcutaneous (Fig1-2-3-4-5). PD fat sat and T1 fat sat enhanced sequences, showed a faint hyperintensity and enhancement of the nerve just close to the adipose-muscular hernia, representing nerve edema and hyperemia consistent with the clinical superficial peripheral neuropathy.

Muscle herniation is defined as a portion of muscle through acquired or congenital fascial layer defects. Tibialis anterior muscle herniation is the most common, because its fascia is the most vulnerable to trauma. Herniations of peroneus longus, brevis, extensor and flexor digitorum longus and gastrocnemius muscles have also been described. Even upper limbs can be involved, but less frequently. Patients are usually adolescents or young adults. Muscle herniation of the extremities is a rare clinical entity, frequently misdiagnosed as a soft tissue tumor and commonly occurs as acquired (post-traumatic or post-surgical) or congenital fascial defects. Congenital causes may be an overall general weakness in the muscular fascia (mesodermal insufficiency), or may occur at sites of perforating nerves and vessels. Acquired causes are usually secondary to trauma. Traumatic examples include penetrating trauma, closed fractures causing a fascial tear (direct trauma), or force applied to contracted muscle causing acute fascial rupture (indirect trauma). Herniation is potentiated by increases in intracompartmental pressures such as muscle hypertrophy or chronic exertional compartment syndrome (CECS). For perspective, regular cardiovascular exercise and physical activity can lead to muscle hypertrophy with a 20% increase in muscle volume. CECS is defined as a reversible form of abnormally increased intramuscular pressure during exercise or physical exertion secondary to noncompliance of osteofascial tissues to exercise-induced increases in muscle volume. Athletic men, such as military soldiers, athletes, mountain climbers, skiers, and those partaking in similar occupational and sporting activities, are the demographic population believed to be at the highest risk. Patients are usually presented with a palpable soft-tissue mass that becomes more firm and prominent after the contraction of the affected limb. Most of the masses are painless and asymptomatic; however, in some cases, they may become painful after prolonged exercises due to focal muscle entrapment and resultant ischemia. Although this condition is especially an esthetic problem, it can lead to spontaneous pain, cramp, local tenderness or potentially neuropathic symptoms. The presence of pain is an important indicator for treatment of symptomatic muscle herniation. A physical examination can also reveal if there is a positive Tinel’s sign present at the region of the palpable lump and muscle hernia. Ultrasound and MRI are considered the methods of choice for detecting fascial defects and muscle hernias. Most symptomatic muscle hernias are successfully treated with conservative therapy, including rest, activity restrictions and compression stockings. Because asymptomatic hernias do not necessitate treatment, a general guideline may suggest conservative therapy only for mildly symptomatic muscle hernias. Surgical referral is warranted for patients with moderate to severe symptoms that are not

Muscle herniation is defined as a portion of muscle through acquired or congenital fascial layer defect, that can cause potentially neuropathic symptoms due to nerve compression and MRI exams can demonstrate this correlation. Most symptomatic muscle hernias are successfully treated with conservative therapy. Surgical referral is warranted for patients with moderate to severe symptoms that are not amenable to a conservative therapy. Fasciotomy appears to be the preferred method by most surgeons, having the least complications and the most successful outcomes postoperatively. 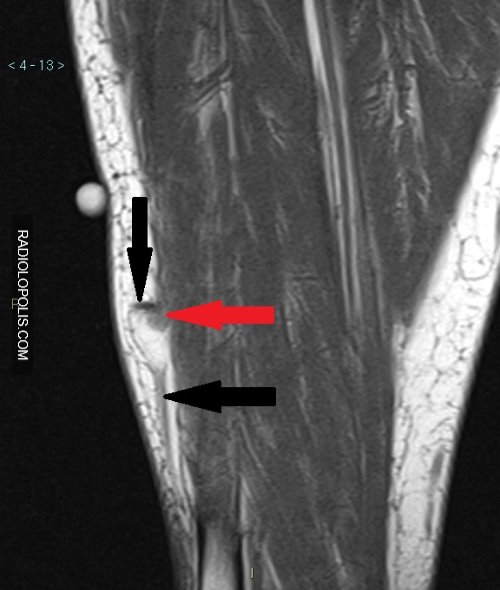