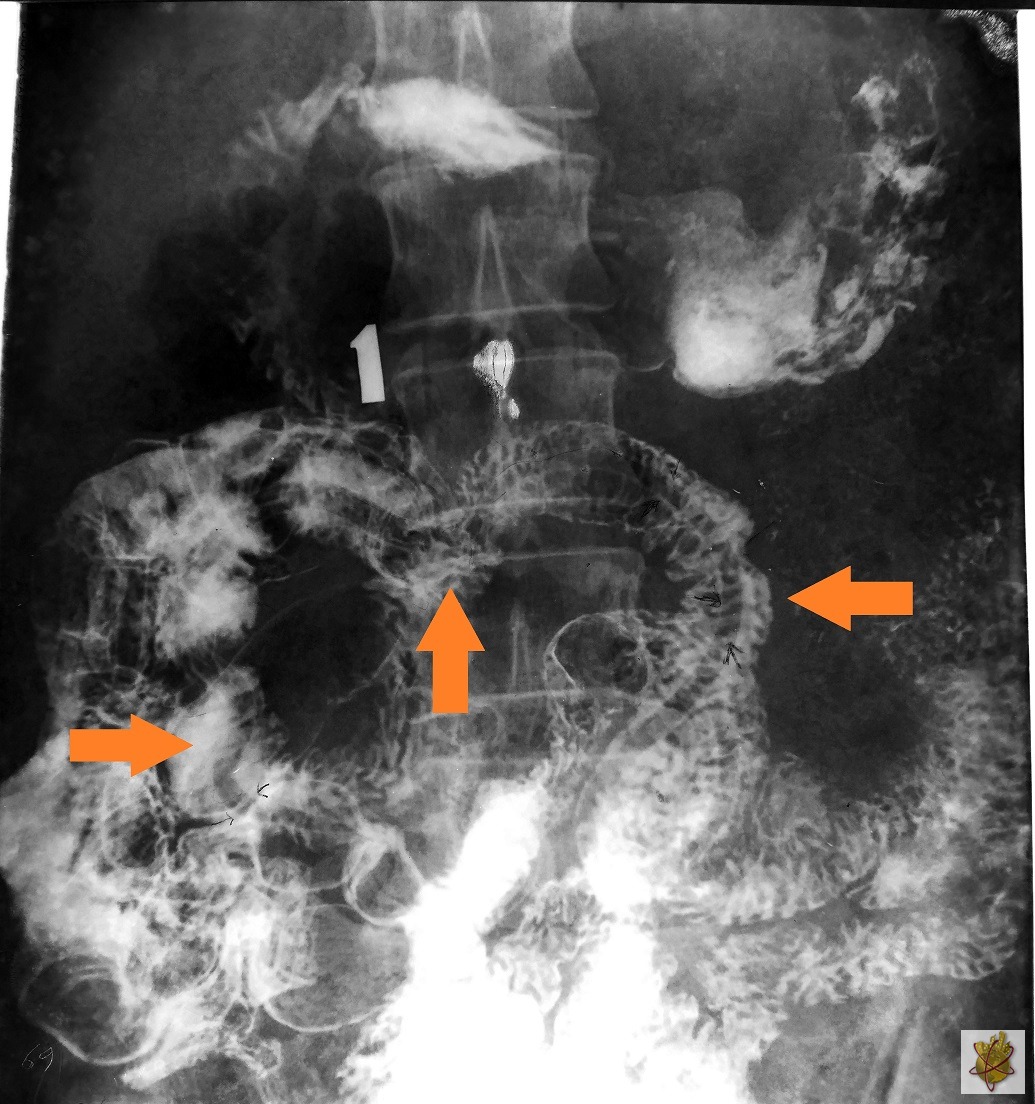 A mentally retarded 26-years-old man was brought to Atma Jaya Hospital Emergency Department (ED) by his caregiver from an orphanage, and being complaint of having abdominal pain one day before admission and anorexia for five days. In arrival at the ED, the patient vomited twice. His vomit contained yellowish-white worm 10-12 cm in length. On physical examination, the patient was thin and pale. His abdomen was distended but soft, tenderness was elicited during palpation and he had increased bowel sounds. Head, neck, mouth, thorax, back and extremities examination were unremarkable. Peripheral blood smear showed microcytic hypochromic anaemia, neutrophilia and thrombocytosis. Routine faeces examination showed greenish, foul-smelling faeces with solid consistency. Ascaris lumbricoides and Trichuris trichiura eggs were found in the stool sample. Conventional radiographic examination, barium contrast examination, and abdominal ultrasound were performed to rule out ileus and appendicitis (Figure 1, Figure 2, and Figure 3). From the patient’s medical history, physical examination and workup above, the patient was clinically diagnosed with bowel obstruction due to ascariasis and anaemia of chronic disease. The patient was put on a fast, had a nasogastric tube inserted, rehydrated intravenously, and was given parenteral antibiotic (cefotaxime), anthelminthic agents (pyrantel pamoate and mebendazole) and laxatives. Until the third day of admission, the patient had more worms coming out from his stool. He was also vomiting worms from the first day of admission until the sixth day. On the seventh day of admission, the patient suddenly had an apnoea. Resuscitation was performed however the patient died from suspected worm aspiration.

Ascariasis is the most common helminthic infection encountered. The prevalence is estimated to be 0.8-1.2 billion people worldwide. Highest prevalence is found in tropical regions and developing countries, most likely due to soil contamination with manure, poor personal hygiene and poor sanitation. Ascariasis is usually asymptomatic, but may cause developmental disorders (in children), pulmonary disorders (Loeffler’s syndrome), bowel, hepatobiliary and pancreatic obstruction. Ascariasis is caused by Ascaris lumbricoides. Adult ascarides live inside the small bowel lumen and have a lifespan of around 10-24 months. These worms can survive from bowel proteolytic enzymes because they are protected by a lipid and collagen shell and able to produce protease inhibitor. The adult worm mate and lay eggs in the small intestine. The eggs will be excreted along with feces and the embryo inside the eggs will become infective after 5-10 days in appropriate living conditions. A person may be infected by ingesting food/drinks that has been contaminated with eggs. Eggs will then hatch in the small intestine due to alkaline conditions and bile salts. Larvae in the small intestines enter the inferior vena cava, through the heart and into the lungs. In the lungs, larvae may penetrate alveoli into the bronchi and crawl up the trachea, where they might be swallowed into the digestive tract. The larvae will then mature into adult worms. Ascarides may cause clinical manifestations both in the larva stage and adult stage. When the larvae migrate into the lungs, they could irritate the lungs and airways, causing non-productive cough, substernal burning sensation, dyspnea and blood-tinged sputum. A large number of adult worms in small intestines may cause obstruction. The adult worms may also migrate to ampulla of Vater and appendix, causing cholangitis, pancreatitis and appendicitis. During its migration to upper or lower digestive tract, worms can be either vomited or defecated from the infected person. The diagnosis of ascariasis is made through microscopic findings of Ascariasis lumbricoides eggs in the stool or the presence of adult worms in the vomit or stool. Peripheral blood examination might reveal eosinophilia, especially in the presence of Loeffler’s syndrome in which chest radiograph may show round pulmonary opacities, several milli to centimeters in size, which spread diffusely across both lungs. These lung opacities usually fade in about 10 days. Abdominal imaging in ascariasis may show direct or indirect signs of worm infestations. The latter is generally associated with intraluminal worm obstruction, such as ileus, volvulus, intussusception, biliary duct dilatation, and signs of pancreatic, gallbladder or appendiceal inflammation. In severe infestation, abdominal plain radiographs may show a mass of worms within distended loops of bowel. Bolus of worms in the bowel appear as aggregates of thick tubular structure of soft tissue densities, whic

Ascariasis should be considered in acute abdominal complaint with unusual imaging findings associated with gastrointestinal obstructions. Findings include intraluminal tubular structure in various imaging modalities, which should be differentiated with foreign bodies and bezoar. 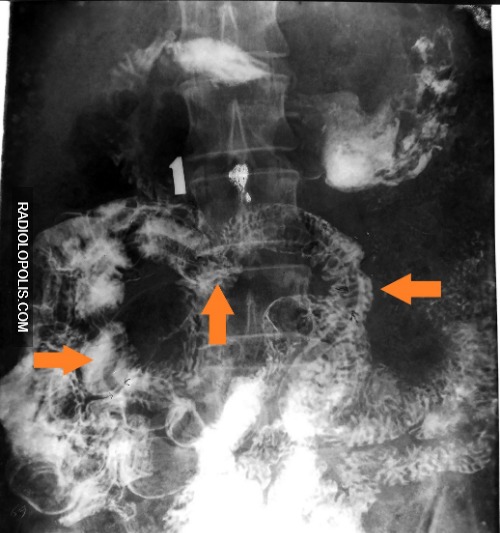 A 26-year-old man with intestinal ascariasis