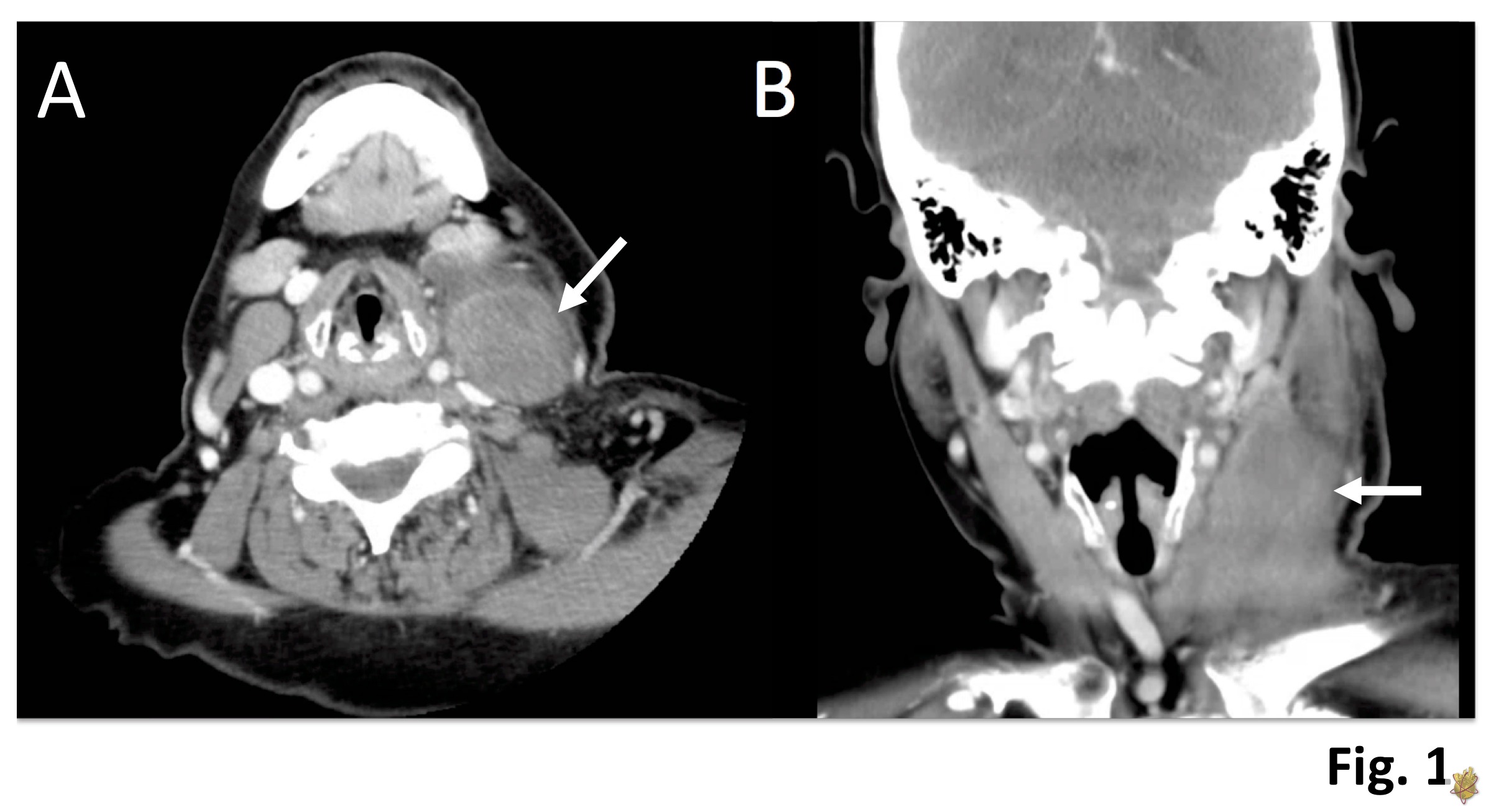 A woman in her sixties developed a progressive enlarging left neck mass just below the mandible that was first noticeable three weeks after discontinuation of Prednisone. She was on 1 mg of oral prednisone daily due to fibrodysplasia ossificans progressiva (FOP). She denied dysphagia, respiratory difficulties, or oral discharge. Furthermore, she did not endorse any new systemic symptoms with no recent fevers, chills, or sweats. In the interim, she was started on oral doxycycline/clindamycin and intravenous vancomycin due to possible infection. The treatment resulted in no apparent improvement. Her extensive medical history was notable for FOP, fibromyalgia, hypothyroidism (on levothyroxine), intertrigo, and muscle cramps. The patient’s only notable lab value was an alkaline phosphatase level of 782 U/L (normal range: 44-147 U/L).

Given the suspicion for a parotid mass, a neck computed tomographic (CT) with contrast was obtained, revealing a large solid-appearing non-calcified left cervical neck mass arising between sternocleidomastoid and carotid space, measuring 10 x 3.6 x 3.5 cm, compressing the jugular vein and displacing the common carotid and internal carotid artery medially (Fig. 1). The mass was separate from the parotid gland and located posterior to the submandibular gland, extending from the angle of the mandible to the level of the clavicle without an apparent separation from the inferior aspect of the sternocleidomastoid. The scout topogram from this neck CT showed no heterotopic ossification. Given these findings, differential considerations included sternocleidomastoid myositis, myositis ossificans, giant angiolymphadenitis, or rhabdomyoma of the sternocleidomastoid. A one-month follow-up neck magnetic resonance imaging (MRI) revealed marked interval decreased size in the left sternocleidomastoid muscle with minimal residual asymmetric prominence and enhancement. However, there was new extensive edema and intense enhancement involving the floor of the mouth muscles (Fig. 2), in addition to edema and enhancement along the lateral fibers of the lower left scalene muscle. This case is notable in regard to subsequent involvement of the floor of the mouth muscles bilaterally without involvement of the tongue muscles. Interestingly, the tongue, extra-ocular muscles, and diaphragm are spared in FOP. The rheumatologist decided to monitor the patient, without restarting prednisone. Her symptoms had been stable since her neck MRI. On a three-month follow-up visit, the patient continued to endorse intermittent pain and tenderness of the neck varying by side and site. She had no difficulty swallowing and had difficultly opening her jaw and chewing as she has intermittently experienced previously but not on initial presentation with the neck mass.

FOP causes mature ossification within soft tissues, resulting in bridging between osseous structures (Fig. 3). This typically initially affects the sternocleidomastoid followed by muscles of the shoulder girdle, upper arms, spine, and pelvis. The disease pattern starts with a mass, surrounding edema, and distortion of fat planes followed by heterotopic ossification in ensuing weeks and months. No effective disease-modifying treatment exists for FOP, although corticosteroids are used for short-term treatment of flares. The genetic underpinnings of this insidious disease have evaded investigators until recently and now upwards of 12 mutations in the regions coding for the glycine-serine rich and protein kinase domains of the ACVR1 gene have been described. ACVR1 encodes activin receptor IA (ACVR1)/activin-like kinase 2 (ALK2), which is a bone morphogenic protein (BMP) type I receptor involved in bone formation, induction, and regeneration. Gain-of-function missense mutations of ACVR1/ALK2 ultimately result in aberrant bone formation in connective tissues and muscles. Interestingly, the patient’s family history was notable for having a sibling with confirmed FOP. Due to its rarity, FOP is frequently misdiagnosed as cancer or other benign entities. A key to early diagnosis is associating a rapid waxing and waning soft tissue mass of the head, neck, shoulder, and upper back with symmetric malformed great toes. Although biochemical testing (i.e. alkaline phosphatase or bone-specific alkaline phosphatase) may be helpful in tracking disease flares, this is not always reliable. The diagnosis can only be confirmed with genetic testing of the ACVR1 gene. Early diagnosis is essential to avoid unnecessary and harmful biopsies that can often hasten disease progression. This is an important consideration given that patients with FOP are susceptible to ossification in regions that sustain even minor trauma. Alternative less likely differential considerations in this case include angiolymphadenitis/Castleman disease, aggressive fibromatosis (desmoid), sarcoma (such as rhabdomyosarcoma), malignant fibrous histiocytoma, dermatomyositis, scleroderma, and CREST syndrome. However, none of these entities are associated with symmetric skeletal malformations or waxing-waning soft tissue masses.

FOP is an infrequently encountered and thus a diagnostically challenging genetic disorder. Clinical history and specific quintessential radiologic signs are key to its early diagnosis and proper clinical management, including avoiding biopsies of suspected lesions that can hasten disease progression. A key to early diagnosis is associating a rapid waxing and waning soft tissue mass of the head, neck, shoulder, and upper back with symmetric malformed great toes. The diagnosis can only be confirmed with genetic testing of the ACVR1 gene, although current genetic analysis typically probe for the most common germline mutation (c.617G>A) and this may miss rarer mutations as is suspected in this case. 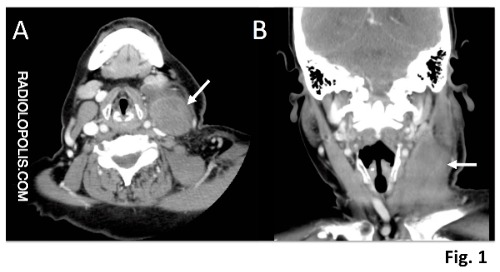 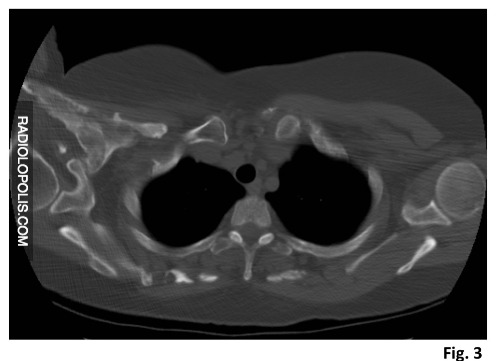