Patient was delivered vaginally at 39 weeks gestation and admitted immediately to the neonatal intensive care unit due to hypotonia, poor feeding, and abnormal eye movements, presumed to be having seizure like activity. Oxygen was administered and electroencephalogram (EEG) video monitoring was initiated. Epileptiform spike and wave discharges were seen arising from the left, right and midline temporal-central regions of the cerebrum. Patient was initially stabilized and abdominal and chest radiographs taken the following day with no abnormal findings identified. Without change in clinical condition and concern for central nervous system disruption, an ultrasound (US) was ordered for the head and neck on day four post-birth (Figure 1). The head US found echogenic material within bilateral caudothalamic grooves and an overall lobular multicystic morphology consistent with possible bilateral grade 1 germinal matrix hemorrhages. The patient was transferred from the local county hospital to a regional level one pediatric medical center for further work up and evaluation. With these findings, and continued clinic picture, a study of magnetic resonance spectroscopy (MRS) was ordered on day 8 post-birth (Figure 2). Using a Siemens 3 Telsa (T) Tim/Trio MR Scanner, a single voxel proton MR Spectroscopy was performed using a Point RESolved Spectroscopy (PRESS) sequence with a Repition Time (TR) = 3000 milliseconds (ms), Each Time (TE) = 30 ms, and 128 acquisitions. Spectra were obtained in the occipital gray matter with 2 x 2 x 2 centimeter (cm) (8 cubic cm3) volume. The following metabolites were evaluated: N-acetylaspartate (NAA), creatine (Cre), choline (Cho), myo-inositol (Ins) and lactate (Lac). Ratios of the metabolite areas were then calculated. Furthermore, we performed two dimensional chemical shift imaging (CSI) proton MR spectroscopy with a double spin echo PRESS sequence using a TR = 1700 ms and TE = 144 ms with one acquisition. Multiple spectra were acquired in one 1.0 cm thick transverse slice at the level of the basal ganglia. The MRS study showed diffuse high concentrations of propylene glycol. The concentrations were higher than would be expected given the dosing of propylene glycol contained in the phenobarbital and therefore suggests an inability to metabolize or excrete propylene glycol. Furthermore, elevated Cho/Cr (+28% to 36% compared to institution age matched normal controls) was found in the mid-occipital gray and bilateral basal ganglia. With a high suspicion for a congenital metabolic deficiency disorder in this neonatal patient, concomitant MR imaging (MRI) of the brain was also obtained on day 8 post-birth (Figure 3). MRI was obtained using the Siemens 3.0 Tesla scanner with multiplanar multisequence images of the brain with and without 0.6 milliliters (mL) of intravenous multihance contrast. The MRI study revealed slightly prominent ventricular system, with small, subcentimeter intraventricular cysts at the bilateral c

With the above findings via EEG, MRS, and MRI along with the clinical presentation, the patient was presumed to have the diagnosis of a rare autosomal recessive peroxisome disorder. Whole Exome Sequencing (WES) done through Baylor identified a formal diagnosis of peroxisomal disorder secondary to Hydroxysteroid 17-Beta Dehydrogenase 4 (HSD17B4), which is a D-Bifunctional protein gene, deficiency. The family was informed of the likely diagnosis and the genetic associations with proper instructions of management and follow up with a geneticist in clinic.

Etiology & Demographics: Peroxisomal disorder secondary to HSD17B4 protein gene deficiency is a rare disorder occuring in the general population at currently unidentified rates. The peroxisome is an important subcellular compartment within the cell that plays a role in metabolism of molecules such as fatty acids and alcohols, like propylene glycol [1]. The National Center for Biotechnology Information (NCBI) comments on the enzyme bi-functionality in beta-oxidation and catalyst for 3-ketoacyl-CoA intermediates with multiple alternative splice sites for encoding specific isoforms of the gene found on chromosome 8 [2]. The location of this enzyme is widely distributed throughout the human body with highest concentrations being found in the liver, thyroid, and adrenal glands (Figure 4). These single gene protein defects of the peroxisome are rare, with the most common one being that of an X-linked adrenoleukodystrophy with a rate of between 1:40,000 to 1:100,000 [1, 3]. This disorder causes issues with myelination of the nervous system via dysfunction of long-fatty acid metabolism, and is the presumed reason for seizures and hypotonia in the patient. There is currently no published data on the demographics and patient populations for these enzyme deficiencies. While the current treatment options are limited, early detection and diagnosis is still important for prognosis and counseling. Clinical & Imaging findings: In the instance of an enzyme deficiency within the peroxisome, the buildup of the substrate within the organelle can cause levels to increase and toxicity to possibly occur throughout the cell leading to potential apoptosis and clinical significance. In our patient with HSD17B4 deficiency, we saw seizure like activity with abnormal eye movement and spike waveforms on EEG and hypotonia with poor feeding. This is a consistent finding for patients with this disorder as described by another case presentation in the journal of clinical investigation [4]. According to recent studies on similar peroxisome disorders signs and symptoms can include: respiratory depression, infections, asphyxia, lactic acidosis, renal failure and hepatic dysfunction (the pathway of elimination from the body), and intravascular hemolysis, among many others [5]. Clinical presentations will vary from patient to patient with the severity of deficiency due from partial to complete lack of function. Propylene glycol is commonly detected in neonatal brain MRS studies as it is commonly used as a solvent in phenobarbital preparations, among other drugs, because it is usually consider safe. The levels detected in this patient were much higher than is commonly detected with levels similar to that of NAA and Cr [6]. Like other alcohol groups, propylene glycol is usually metabolized in the liver, small amounts in other tissues, by the enzyme alcohol dehydrogenase and integrated into the citric acid cycle for metabolic usage and elimination as needed (Figure 5) [7]. The

Congenital anomalies are rare but devastating conditions in the neonatal population, and their clinical presentations, often easily identifiable, can be broad and generic making it difficult to identify on routine work up based on the vast array of etiologies for each deficiency and variation. Magnetic Resonance Spectroscopy can be an effective and efficient method for identifying these genetic deficiencies early in the work up of abnormal neonatal evaluations to better treat and manage each patient’s acute symptoms moving forward. 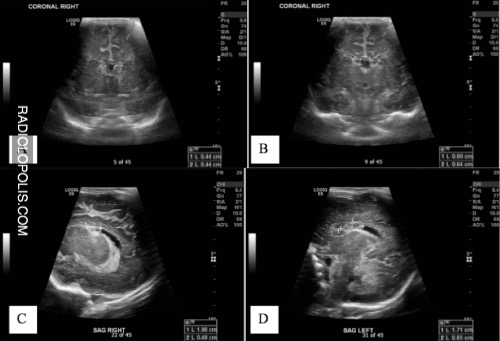 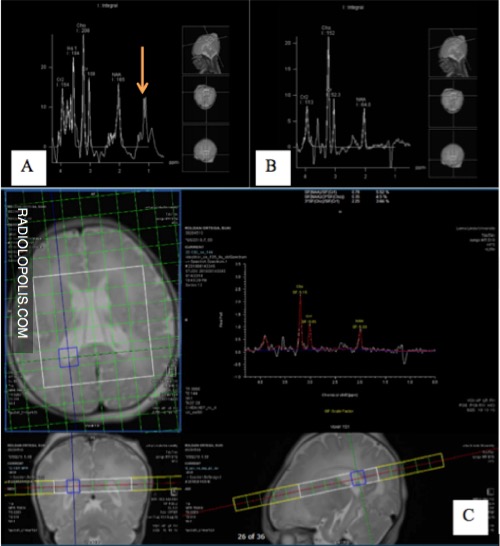