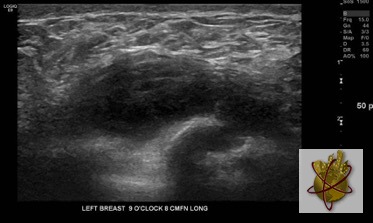 The patient presented to breast clinic with a palpable mass and a recent history of chest wall trauma. Ultrasound revealed a 5 cm hypoechoic chest wall lesion. Given the patients youth and recent trauma, a benign breast etiology was favored however given atypical appearance, a biopsy was recommended. Histology yielded coccidiomycosis spheroles and the diagnosis of disseminated coccidiomycocis. The patient subsequently underwent CT CAP to evaluate extent of disease and was discovered to have vertebral osteomyelitis, psoas abscesses, and clavicular osteomyelitis with bronchoclavicular fistula. The patient was treated with abscess drainage, Amphotericin B, and will continue with lifelong antifungal therapy.

Coccidioidomycosis is a systemic granulomatous infection caused by the dimorphic soil yeast Coccidioides immitis or Coccidioides posadasii. This disease is endemic in the southwestern United States particularly Arizona, California, New Mexico, and Texas. Greater than 95% of cases in the US occur in Arizona and California with more than 6,631 cases reported from January 1, 2019 - September 3, 2019. The infection begins through inhalation of airborne coccidioides spores from the soil. The majority of patients are asymptomatic, with as many as 60% of cases demonstrating no discernible symptomatology. When symptomatic, acute infectious pulmonary symptoms such as cough are the most common presentation. When the host’s immune system is unable to contain the spread of infection, hematogenous dissemination may result in extrapulmonary disease. Organs most commonly involving include the skin, meninges, and skeleton. Other less frequently involved systems include the eye, liver, kidneys, endocrine glands, prostate, genital organs, and the peritoneal cavity. There have also been lesions reported in the subserosal intestine, heart, and bladder. Patients at highest risk of disseminated disease include immunocompromised patients and pregnant women. While coccidiomycosis is endemic in the southwestern United States and parts of South America, disseminated coccidioidomycosis occurs in <1% of all infections. This patient had no pulmonary symptoms and initially presented atypically with a breast mass. Additionally, there is limited data on bronchoosseous fistulas in coccidiomycosis however to the best of our knowledge this is the first case of a bronchoclavicular fistula secondary to disseminated coccidioidomycosis. 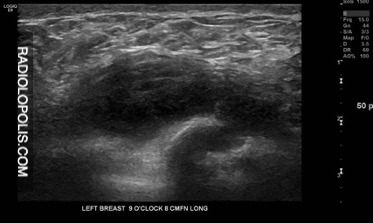 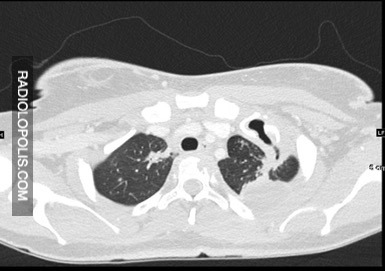 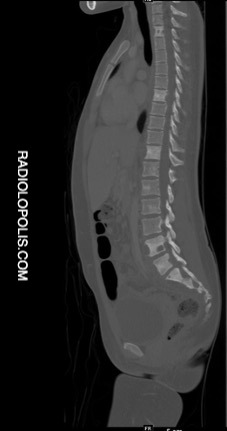 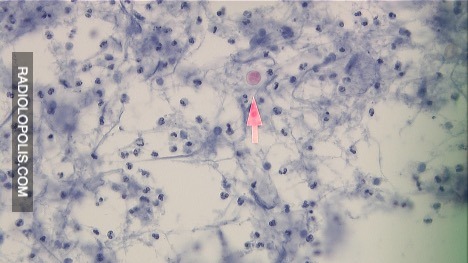