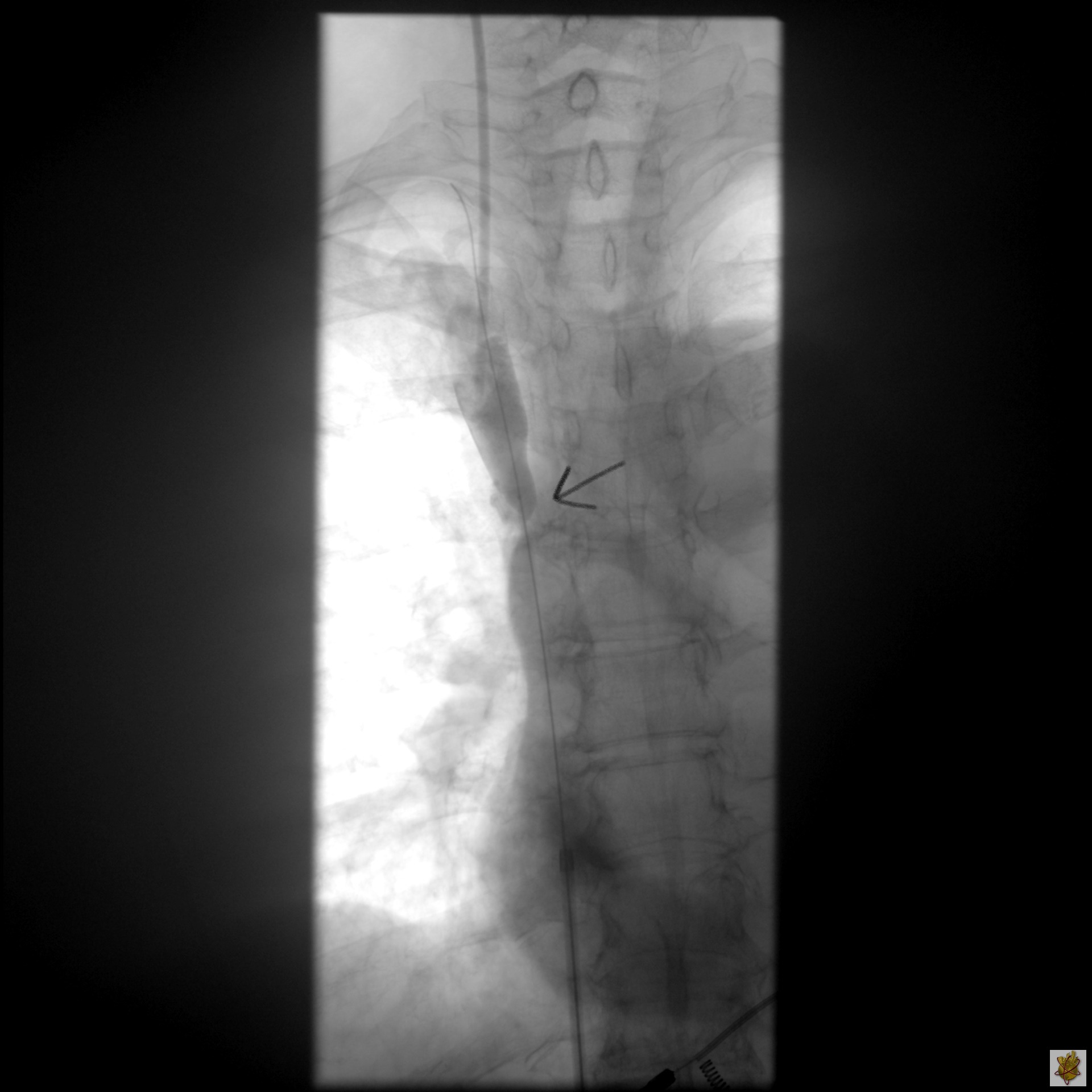 The female patient, 64 years old, presented to our hospital. 7 year prior to the current presentation the Ormond’s disease was diagnosed. The medical treatment started with steroids to slow down the process. She has been supervised by rheumatologist till that time. In 2014 plastic reconstruction of ureter performed. The cause of it was retroperitoneal fibrosis. The symptoms of superior vena cava (SVC) stenosis appeared in 2019: constant headache, facial hyperemia, swelling of neck veins, morning hoarseness, face edema. In March, 2019 CT-angiography was presented: signs of paraaortic fibrosis complicated by superior vena cava compression. The anti-inflammatory therapy was started with prednisolone and azatioprin. The symptoms became much more severe because of the Cushing syndrome. The CT after anti-inflammatory therapy presented: fibrosis of mediastinal fiber paraaortally, paraaortic circular tissue densification throughout the abdominal aorta, subocclusion of the SVC. The decision was to do the stenting of the superior vena cava. In October the patient was treated by endovascular revascularization. The antegrade access via common femoral vein with an introducer sheath (7F) performed. Radifocus Stiff 0.035” was used to cross the lesion. With ultrasound guidance in the antegrade direction punctured the right internal jugular vein with an introducer sheath (6F) placement. Angiography: subocclusion of SVC with 25 mm length. A Boston Scientific WALLSTENT Uni 10*42 mm stent was positioned and implanted. Post-dilatation with Cordis PowerFlex 7*20 mm balloon catheter. Control angiography: the stent is open to the optimum diameter, there are no signs of dissection, no thrombosis. SVC blood flow is good. Instruments removed from the vessels. Introducers removed. Manual hemostasis. Pressure bandage. The symptoms disappeared immediately right on the operation table. The face and the neck came to normal size and color. On the 1st day after surgery, the patient noted a significant improvement in well-being - headaches and hoarseness of the voice ceased to disturb. Patient discharge 2 days after surgery. Rivaroxaban 20 mg was prescribed for 6 months, with a dosage reduction of up to 10 mg continuedly. CT scan control was performed after 6 months.

Idiopathic multifocal fibrosclerosis (IMP) is an inflammatory disease that is characterized by the development of inflammatory pseudotumor, which can manifest itself in various combinations of the process localization. Retroperitoneal fibrosis (Ormond’s disease) is one of the subspecies of IMP [1], its frequency is approximately 1 case per 200 thousand people. This pathology occurs in approximately 0.005% of the US population each year [2]. This explains the lack of knowledge, the lack of a real standard of patient management with the definition of optimal drug therapy and the most effective method of surgical or endovascular treatment [3]. Idiopathic retroperitoneal fibrosis is characterized by an increase in serum IgG4 concentration (≥1.35 g / l) with severe tissue infiltration by lymphocytes and IgG4-positive plasma cells and local or diffuse fibroplastic proliferation [2]. In the absence of therapy, the disease can progress and fibrosis can deform the retroperitoneal structures, including the main vessels, ureters, nerves, kidneys, and biliary tract [4]. The etiology and pathogenesis of mediastinal fibrosis are similar to retroperitoneal, because they are part of a single process. Mediastinal fibrosis can lead to SVC syndrome [1]. SVC syndrome is the result of obstruction of venous outflow through the vena cava superior. SVC is the main pathway for the outflow of blood for the head, neck and upper body. Therefore, any SVC obstruction is associated with a combination of symptoms that include swelling and dilated veins of the upper body. Despite the fact that major studies on this pathology have not been conducted, the generally accepted opinion is that the first-line therapy for idiopathic fiber fibrosis is pulse therapy with methylprednisolone, followed by its use in high doses. Long-term therapy with one of the following drugs is also required: azathioprine, cyclophosphamide, colchicine, cyclosporine, tamoxifen, or mycophenolate. These drugs significantly affect the prognosis [5]. There are also various methods of treating SVC syndrome - percutaneous transluminal angioplasty, stent implantation, thrombolysis, mechanical thrombectomy and venous transplantation [6]. The endovascular treatment is less traumatic and acceptable method. Since the first report of SVC stenting in 1986, Charnsangavej C. et al., endovascular treatment has become a recognized treatment option for SVC syndrome [7]. Percutaneous angioplasty with stenting has been successfully used for stenosis of SVC to quickly and completely restore blood flow [8]. Crowe et al. report success in 85% of patients with SVC occlusion. There is currently no consensus on which antithrombotic therapy is best after stenting according to these papers. Warfarin, aspirin and clopidogrel have been tested in these patients over a period of 6 months. In most cases, the interventionist individually adjusts the therapy for the patient. 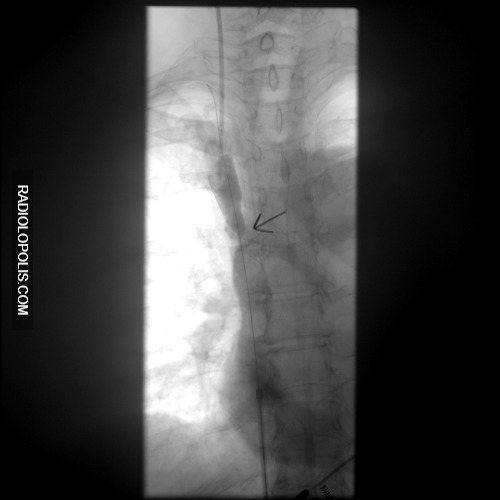 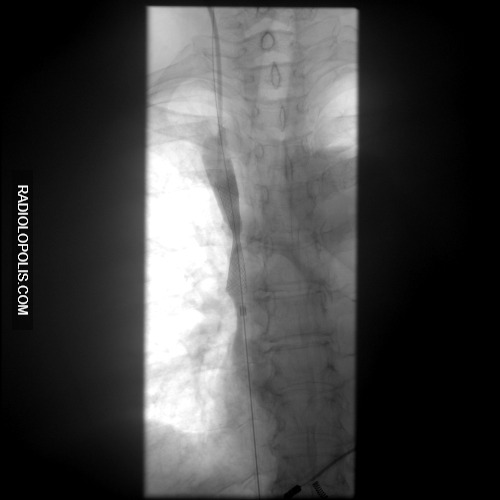 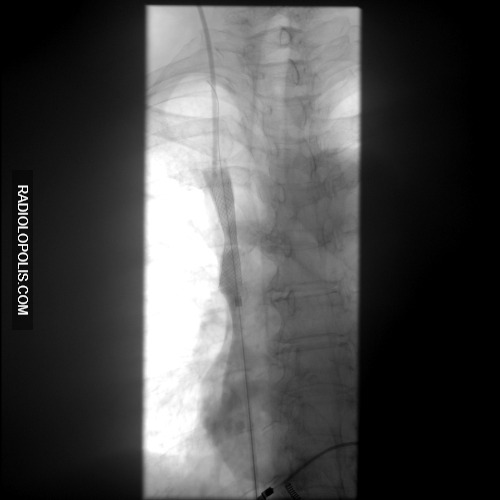 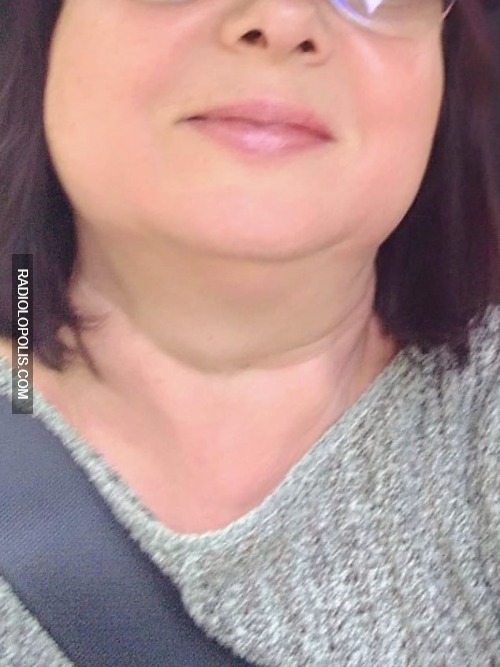 the patient before operation 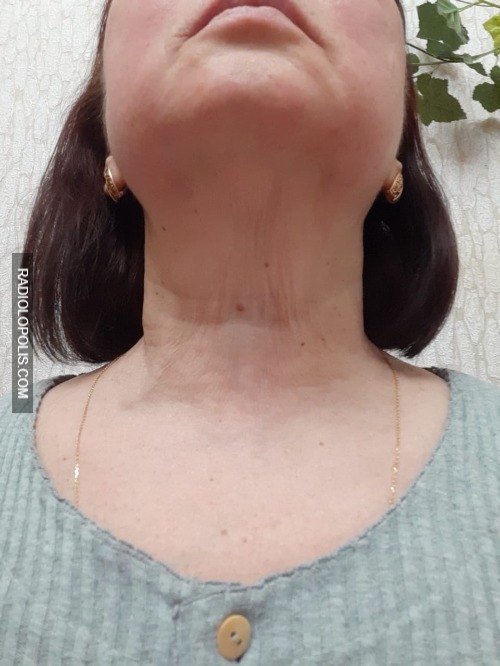 the patient after operation