A 15-days old male baby delivered at 39 weeks of gestation by normal vaginal delivery presented to the paediatric department with complaints of increasing head circumference. Head circumference recorded at birth was 34 cm (from birth record) and on 19th day of life was 40 cm (on physical examination). On further elicitation of history, it was revealed that antenatal sonography was suggestive of asymmetrical dilatation of bilateral lateral ventricles although imaging data for the same was not available. Haematological and CSF examination showed no abnormality.

CT performed on 16 slice computed tomography machine, GE Health revealed a large midline extra-axial cyst communicating with body and occipital horn of left lateral ventricle which appear dilated. There was resultant compression of left cerebral parenchyma by the cyst along with dilated lateral ventricle. The right lateral ventricle was slightly prominent in size, although still small in comparison to left side. 4th ventricles appear normal. Contrast enhanced CT shows non enhancing cyst and falx cerebri. MRI brain (performed on 1.5 Tesla Siemens Magnetom Essenza) confirmed the above findings. Sagittal T2WI revealed partial agenesis of corpus callosum with only rostrum and genu being visible. Falx cerebri was unremarkable and both thalami were separate and distinctly visualised. No other brain anomalies were identified.

The association between intracranial cysts and agenesis of corpus callosum (ACC) with intracranial malformation is well recognized [1, 2]. A new system of classifying morphologically distinct cases of interhemispheric cysts that occur in the presence of ACC was devised by Barkovich in 2001 [3]. This classification scheme grouped 25 cases on the basis of ventricular, cystic, and gross morphologic abnormalities, with the aim of associating types of cysts that may share elements of common origin and, possibly, prognosis. The various subtypes of cysts were classified with the assumption that the presence of a specific type of underlying cyst, ventricular defect, diencephalic malformation, or genetic anomaly produces malformations, deformations, or disruptions because of mass effect that may have similar imaging appearance. The Barkovich classification divides cases of interhemispheric cysts associated with ACC into two main types [3, 4]. Type 1 cysts are diverticula of lateral and third ventricles. They may form secondarily due to communicating hydrocephalus and are primarily ependymal lined. Type 2 interhemispheric cysts are lobulated, do not communicate with ventricle and are mostly lined by arachnoid or glial ependymal cells on pathological evaluation. There may be associated gyral abnormality, neuronal heterotopia or Dandy Walker malformation. The theory behind origin of interhemispheric cysts is not well understood and they may not appear in sonography till late gestation [5]. The cause of the hydrocephalus is unknown in Type 1 cysts, but it is speculated that abnormalities in the embryonic mesenchyme inhibit expression of the Slit and Comm proteins, both of which are critical to normal midline crossing of callosal axons and resultant impaired CSF absorption. For type 2 cysts it is difficult to understand why multilobulated cysts develop in the interhemispheric region in association with callosal agenesis unless it is, again, related to abnormal differentiation of the primitive mesenchyme; the interhemispheric mesenchyme forms the permissive substrate for axonal crossing of the midline commissures and later differentiates into the subarachnoid space. Although definitive association between intracranial imaging of a cyst and its histologic type has not been completed to date, characteristics of intracranial cysts seen at sonography and MR imaging can lead to a presumptive diagnosis of cyst histology. On the basis of their site, morphology, and imaging features, they are most likely arachnoid, neurenteric, or ependymal in origin [3]. Based on the Barkovich classification, the case presented is a type 1 interhemispheric cyst which communicates with lateral ventricle and presented with hydrocephalus and macrocephaly. Usual presentation of interhemispheric cysts is seizures, developmental delay and neurodevelopmental disorders with higher incidence in male patients [4, 6]. Antenatal ultrasound is commonly used for prenatal diagnosis of callos

Interhemispheric cysts are relatively rare lesions which are often associated with agenesis of the corpus callosum. Little is known about the pathogenesis of this condition. On imaging, these appear as extra-axial cystic lesions which usually follow CSF signal and maybe associated with cortical and white matter abnormalities. These cysts should be differentiated from other intracranial cysts as the prognostic and therapeutic implications may differ. 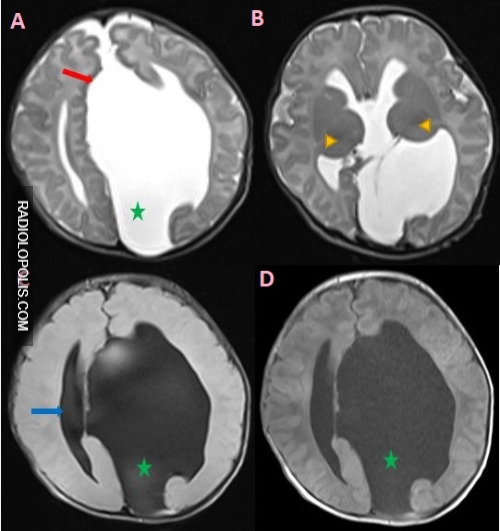 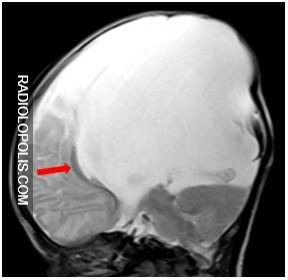 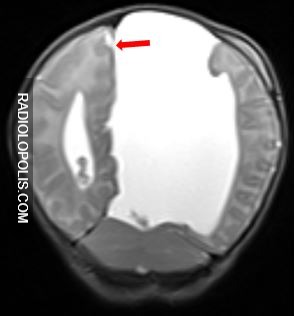