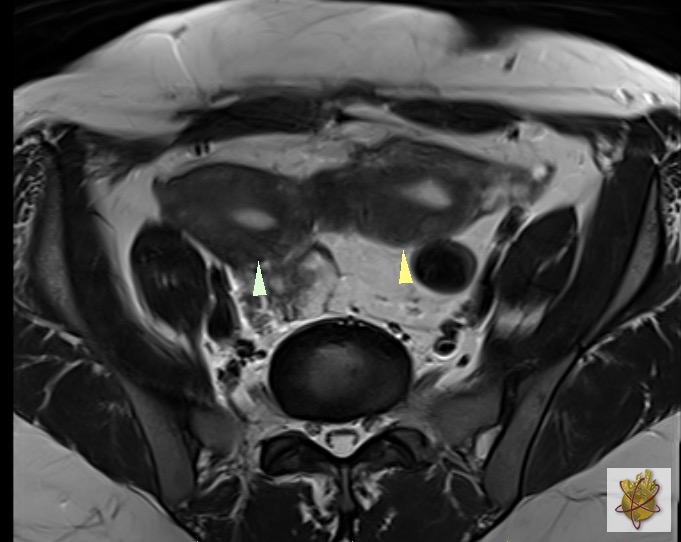 A 31 year old female presented to the hospital with chief complaint of acute retention of urine for 1 day. She also complained of pain in the lower abdomen for past 2 months. The pain was gradual in onset, intermittent and with episodes of worsening in between. It was radiating to back and lower limbs and not relieved on rest or medication. There was no history of trauma, instrumentation or burning micturition. She had no bowel complaints. The patient attained menarche at 14 years of age and had regular menses since then with average blood flow. She never had complaints of any cyclical dysmenorrhea or any urinary complaints. She had been married for last 12 years and was G2P2L2A0 (G-Gravida, P-Parity, L-Live, A-Abortion). Both deliveries were done through Caesarean section due to non-progression of labor in 1st delivery. Patient was informed regarding presence of didelphys uterus after 1st delivery. On examination, the patient was conscious and alert. Her vitals were within normal limits. Chest, cardiac and nervous system examinations were normal. Per abdomen examination revealed soft and tender suprapubic bulge, however no guarding or rigidity was present. Per speculum examination revealed a large cystic mass in anterior vaginal wall. Cervical os could not be seen. On per vaginal examination, a large cystic mass was felt occupying whole of vagina and cervix could not be felt. The patient was catheterized to relieve urinary symptoms. Ultrasonography of abdomen and pelvis revealed non visualization of right kidney, two separate uterine horns and a cystic collection posterior to uterine horns with low level echoes within. Intravenous pyelogram revealed absence of kidney in right renal fossa. No uptake of contrast was seen even after 24 hours after intravenous injection of contrast. Left kidney was normal in size, shape, outline and axis. Magnetic resonance imaging revealed two widely separated, almost normally developed uterine horns with maintained zonal anatomy, two separate cervices and patent left vagina. A cystic collection measuring 7.8cm x 7.4cm x 4.9cm in size showing intermediate signal intensity in T1 weighted images, hyperintense signal intensity with fluid-fluid levels in T2 weighted images was noted communicating with right cervix and located inferior to cervix suggestive of hematohemicolpos. Screening of the abdomen revealed absence of right kidney. On the basis of above described findings, a provisional diagnosis of uterine didelphys, obstructed right hemivagina causing hematohemicolpos and right renal agenesis was made. The patient was taken up for laparoscopy which was converted into open laparotomy due to significant adhesions. The findings suggestive of Herlyn-Werner-Wunderlich syndrome on imaging were confirmed. The obstructed right hemivagina was distended with a collection which was found to be pus mixed with blood. Right hemihysterectomy was performed to prevent potential complications such as pus collection, r

Herlyn-Werner-Wunderlich syndrome is a rare complex congenital anomaly of urogenital tract that involves abnormal development of the Mullerian and mesonephric ducts in the female embryos. Its estimated occurrence is 0.1% to 3.8% with only a few reported cases occurring during pregnancy. It is characterized by uterus didelphys, unilateral obstructed hemivagina and ipsilateral renal agenesis. The right side is affected twice more frequently than the left side. The syndrome falls under type III Mullerian duct anomaly classification system of American Society for Reproductive Medicine (ASRM). According to the newly proposed classification system based on a review of 79 patients, it is categorised as: Classification 1 - a completely obstructed hemivagina (1.1 - with blind hemivagina; 1.2 - cervicovaginal atresia without communicating uteri) and Classification 2 - an incompletely obstructed hemivagina (2.1 – partial resorption of vaginal septum; 2.2 – with communicating uteri). Strong suspicion and knowledge of this anomaly are essential for a precise diagnosis. A typical presentation of this syndrome is dysmenorrhea in adolescent age group, few months to years after attaining menarche. Patients can also present with pelvic pain, mass, abnormal vaginal discharge, infertility, endometriosis, complicated pregnancy and labor. The initial clinical diagnosis is incorrect in the majority of the cases because of its rare incidence and misleading presenting signs and symptoms. Menstrual flow from the patent unobstructed hemivagina gives the impression of normal menses. Thus, accurate diagnosis and surgical management may be delayed for several months or even years. Our patient had an atypical presentation being an adult female with no previous history of significant dysmenorrhea and an obstetric history of two live births by Caesarean section. She presented with acute retention of urine. Such presentation in a multiparous female has not been described so far in the literature. Ultrasonography and Magnetic resonance imaging (MRI) are useful in its detection. MRI is the primary modality for diagnosis and pre-operative planning of the Herlyn-Werner-Wunderlich syndrome. It evaluates uterine morphology, detects communication between uterine and vaginal lumen, characterizes fluid contents and diagnose complications like endometriosis. In our case, MRI findings of two widely separated normally developed uterine horns, two separate cervices, patent left vagina and presence of right hematohemicolpos with associated absent right kidney suggested a preoperative diagnosis of Herlyn-Werner-Wunderlich syndrome. These findings were subsequently confirmed intraoperatively. As per the newly proposed classification system, our case was classified as 1.1 that is completely obstructed hemivagina with blind hemivagina. The management in typical presentation in adolescent or young females is resection of the vaginal septum followed by vaginoplasty. In our case, right hemi

Herlyn-Werner-Wunderlich syndrome is a rare complex congenital urogenital anomaly. Awareness of such anomaly is a prerequisite for early and prompt diagnosis. Surgical management allows rapid relief of symptoms and prevention of potential complications. 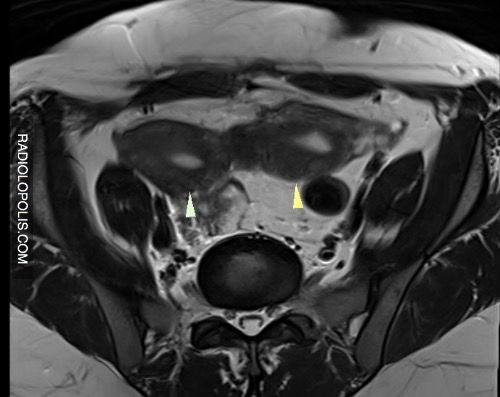 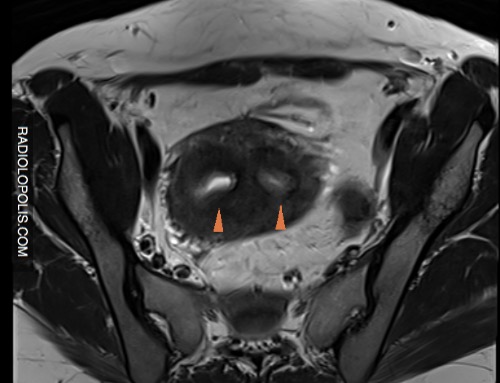 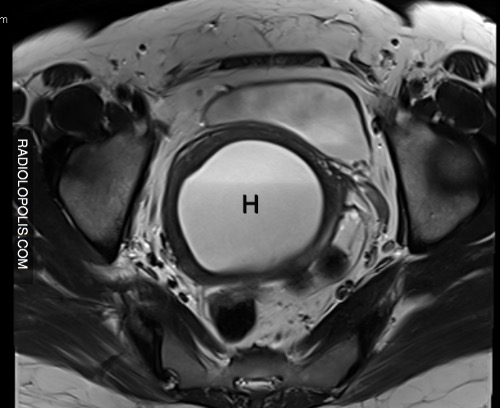 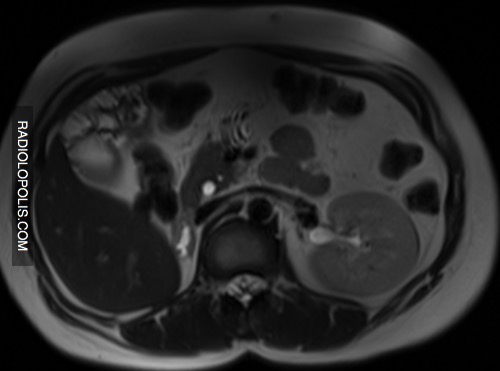 Herlyn-Wener-Wunderlich syndrome in a multiparous female