The management of intraperitoneal PP rupture remains difficult due to its rarity and rapid clinical deterioration. Intraperitoneal rupture leads to the release of enzymatic fluids that immediately causes chemical peritonitis. Further, patients often present with hemodynamic instability, sepsis and death. Surgical or endoscopy management remains the first line therapy when the patient is able to tolerate such procedure. The goal is to prevent complications from pancreatic ascites, and to provide internal drainage and closure of the rupture site. In the literature, this is accomplished by exploratory laparotomy, abdominal washout and internal drainage via cystogastrostomy or cystojejunostomy. Our patient unfortunately could not tolerate either. In the critically ill patients, conservative management should be considered. Percutaneous drainage minimizes the impact of pancreatic ascites. TPN and octreotide minimize pancreatic stimulation and allow the ruptured PP to self-seal. Therefore, it prevents the accumulation of further pancreatic ascites. Further studies are required to evaluate the safety and effectiveness of the conservative management in critically ill patients.

IR-guided drainage should be attempted in patients with spontaneous intraperitoneal pancreatic pseudocyst rupture who are too sick to tolerate surgery. IR-directed therapy can be a "last-resort" or first-line therapy depending on the clinical scenario. 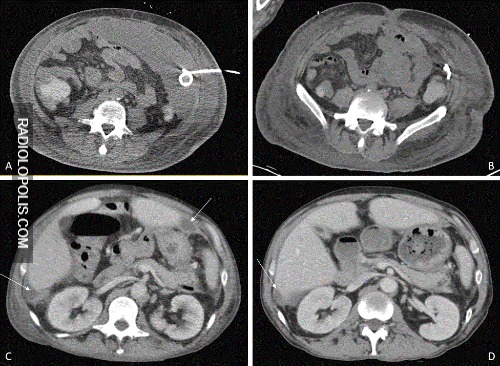