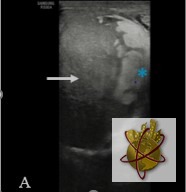 Ultrasound examination of the scrotum revealed a large, heteroechoic solid mass measuring 6.3x6.2x7.6 cm in the right scrotal sac separate from the testis (figure 1A). Right epididymis and spermatic cords were normally visualized. There were areas of hyper echogenicity within the mass probably corresponding to fat. On colour doppler interrogation, minimal internal vascularity noted within the mass (figure 1B). Based on the US findings, a diagnosis of extratesticular soft tissue mass was made, and a CECT was planned. Left scrotal sac, bilateral inguinal region and abdomen were unremarkable on US. Contrast enhanced CT of the abdomen and scrotum revealed a large, fairly well defined heterogeneously enhancing mass in the right scrotal sac, posterolateral to the testis and separate from it. Epididymis, spermatic cord and inguinal canal appeared normal. The mass predominantly contained enhancing soft tissue component with scattered areas of fat attenuation (-50 to -60 HU) in the inferior pole (figure 2). No enlarged retroperitoneal lymph nodes or pulmonary nodules were noted. Based on the CT findings a diagnosis of paratesticular liposarcoma was made. The patient underwent right radical orchidectomy and wide excision of the tumor with high ligation of the spermatic cord. On gross examination the tumor appeared nodular, grey white and myxoid with fatty areas at places. Microscopy revealed spindle cells and adipocytes intermixed with few lipoblasts and adipocytes showing nuclear atypia, the features consistent with well differentiated liposarcoma of sclerosing type, confined to the tunica albuginea with testis and spermatic cord free of the tumor. The patient had uneventful recovery and was advised follow up with CT chest and abdomen after 6 months.

Scrotal and inguinal masses are the common patient complaints in middle-aged adult males aged between 50 to 60 years [1], However, the age predilection is with a range of 16 to 90 years of age [2,3]. They lead to a diagnostic challenge both clinically and radiologically due to the multiple anatomical structures found in confined space of scrotum. Scrotal masses can be testicular or paratesticular. The vast majority (97%) of tumors of the nonepididymal extratesticular soft tissues are benign tumors of spermatic cord, the most common being lipoma [4]. Most common malignant tumor of paratesticular location in adults is liposarcoma with incidence ranging from 9.8-16% [5] followed by leiomyosarcoma and Malignant fibrous histiocytoma (MFH). Paratesticular liposarcoma, a malignant tumor is a rare entity with only few cases reported till date. Paratesticular liposarcoma accounts for 12% of all sarcomas [6]. It has mesodermal origin derived from adipose tissue. Although it is the most frequently encountered intrascrotal sarcoma, primary tunical involvement is less common. Spermatic cord is the most common site followed by testicular tunics and epididymis (76%, 20%, and 4%, respectively) [7]. The mean age at presentation is 55 years (with a range from 16 to 85 years) and usually presents as a painless scrotal mass [8]. The presentation can be mistaken clinically for inguinal hernias or hydrocele [9]. Liposarcoma is a solid, bulky lipomatous tumour with heterogeneous architecture, often containing areas of calcification and appear yellow on gross appearance [10]. Histologically, four types of liposarcoma have been described, well differentiated, sclerosing, myxoid and dedifferentiated types [11]. USG is usually the first investigation done, given its wide availability, low cost, and superior depiction of scrotal anatomy. It typically reveals a solid, heteroechoic or hyperechoic lesion separate from the testis. Regions of increased echogenicity can be seen related to the internal fat content of the lesion. Doppler sonography commonly shows high vascularity inside the lesion. However, USG findings are often variable and nonspecific [12]. CT and MR imaging are more specific in diagnosis of liposarcoma, since these modalities have the ability to confidently demonstrate fat. CT demonstrates a soft tissue mass with fat attenuation intermixed with septa or soft tissue nodules. Macroscopic fat can be detected as regions of tissue with negative Hounsfield unit measurements [13]. The subtype of liposarcoma determines the presence and relative percentages of soft tissue and macroscopic fat seen at imaging. Well-differentiated liposarcoma tends to have large amounts of macroscopic fat relative to enhancing soft tissue, while the macroscopic fat may be absent or present in a small quantity in dedifferentiated and sclerosing variants (as in current case) [12]. MRI is being increasingly used in the characterization of scrotal masses because of its superior soft tiss 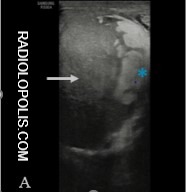 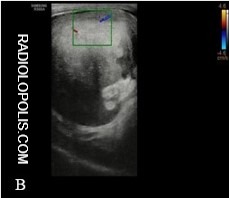 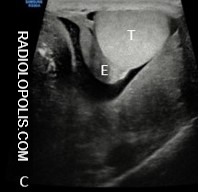 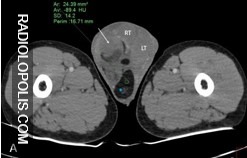 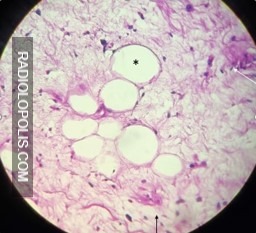