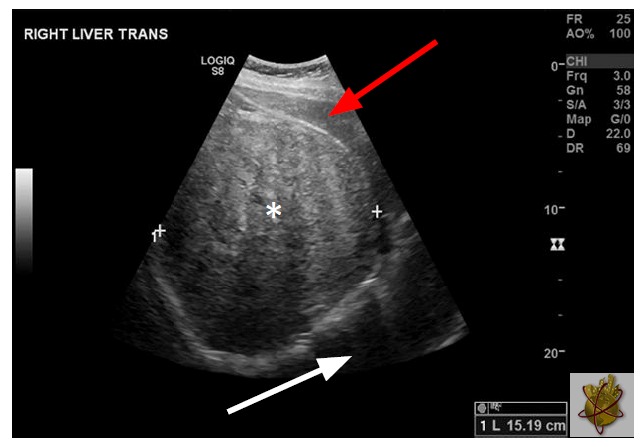 A 45-year-old female with a vague past medical history of an indeterminate liver mass came to the emergency department complaining of 2 weeks of sharp intermittent right upper quadrant abdominal pain occasionally radiating to her right flank that suddenly worsened in severity to 8/10 that day. Her pain was not associated with eating. She denied fevers, chills, jaundice, gastrointestinal, genitourinary, or cardiovascular complaints. On physical exam, her vital signs were normal, and a large, mobile, tender mass was palpated in the right upper quadrant of the abdomen.

Abdominal ultrasound in the emergency department (Fig. 1) identified a solid, circumscribed mass in the right hemiabdomen occupying and extending beyond the full field of view. A subsequent axial CT scan with and without IV contrast was performed (Fig. 2) demonstrating a heterogeneous, noncalcified right retroperitoneal mass without fat, arising from the upper pole of the right kidney. In the non-contrast CT of the abdomen with axial reformats in liver window (Fig. 2A), multiple regions of interest were sampled with the average Hounsfield unit ranging from 33 to 48 (SD of 16-18) with no evidence of macroscopic fat. The mass is well-circumscribed and appears to be separated from the liver by a fat plane. Contrast enhanced CT of the abdomen in the portal phase with axial reformats in soft tissue window (Fig. 2B) demonstrated the mass to be heterogeneously enhancing with a few foci of avid enhancement suggesting vascularity. The mass is hypoenhancing relative to the right renal cortex and appears inseparable from the right kidney with a “claw sign” splaying the renal sinus with the epicenter of the tumor therefore likely in the right kidney upper pole. The apparent “claw sign” suggests a neoplasm of renal, urothelial or renovascular origin, rather than arising from adjacent retroperitoneal tissue. There was significant mass effect on the residual right kidney, the other retroperitoneal structures, the liver and inferior vena cava. There was no evidence of metastasis, hydronephrosis, or invasion of the chest wall, diaphragm, and adjacent organs. Contrast enhanced coronal reconstruction in soft tissue window demonstrates heterogeneous enhancement (Fig. 3A) with several foci of avid enhancement, more conspicuous on coronal reconstructed maximum intensity projection images (Fig. 3B). These foci appear to represent intra-tumoral vasculature. The mass replaces the right kidney upper pole again displaying the “claw sign” (Fig. 3A), and appears to emerge from the cortex or capsule of the upper pole of the right kidney and extend rostrally. The liver can again be seen in the left hemiabdomen and appears separated from the mass by layers of compressed tissue, including a left displaced inferior vena cava (Fig 3A). The superior border of the mass is delineated by the right hemidiaphragm without evidence of invasion (Fig 3A). The lateral border of the mass abuts ribs 9-12 without evidence of chest wall invasion. The medial border of the mass abuts the T9 to L1 vertebral bodies and the right psoas muscle without evidence of invasion. Several enlarged vessels are identified in the retroperitoneum inferior to the mass, presumed to be engorged collateral veins secondary to mass effect on the vena cava (Fig 3B). Aortogram and renal angiogram (Fig. 4A-C) demonstrated the arterial supply of the tumor arises from right renal artery superior and anterior branches. There is an absence of normal right upper pole renal cortical enhancement compatible with tumor rep

BACKGROUND Small, clinically insignificant renal leiomyomas are suspected to be relatively common and have been reported to be found in 4.2 to 5.2 percent of autopsies [1]. Despite this, they account for only 0.29% of all treated renal tumors as the vast majority are asymptomatic and are discovered incidentally. Clinically significant large renal leiomyomas such as the one identified in this case are exceptionally rare. When large enough, they often present with pain and a palpable mass, while less frequently with hematuria [1]. Renal leiomyomas are regular, well-circumscribed, encapsulated benign lesions of well-differentiated smooth muscle cells [2]. On gross examination they are firm, whirling, white or red masses. It has been shown that they typically arise from smooth muscle cells within the renal capsule or renal pelvis or sometimes from the tunica media of renal vasculature [3]. Renal leiomyomas display a female predilection in a ratio of 2:1, which may be partially explained by the fact that these tumors have been shown to uniformly express estrogen and progesterone receptors [3,4]. In support of this, renal leiomyomas occur most commonly in women of reproductive age, at which time hormonal profiles may foster supportive conditions for tumor growth [5]. The mean age of presentation is 42 years [1]. Similar to the presentation in this case, these benign lesions are typically asymptomatic until they exhibit mass effect. This is consistent with the large average reported size of leiomyomas in the retroperitoneum of 16.2 cm in length and 1.6 kg in weight [6]. The mass in our patient measured at least 20.6 cm by imaging, comparable but larger than the reported average. Studies on leiomyomas in other locations of the body have shown that metastasis is a very rare occurrence [7]. As clinically significant renal leiomyomas are rare, the metastasizing potential of these tumors is not entirely clear, however, due to presumed similar pathophysiologic processes it can be inferred that leiomyomas are benign neoplasms. Renal leiomyomas typically appear as hypoechoic solid masses on ultrasound. In non-contrast CT, these tumors are typically hyperdense compared to the renal parenchyma and exhibit comparable density to muscle. In CT with contrast, leiomyomas are hypoenhancing compared to the renal parenchyma at the corticomedullary phase and show progressive enhancement in later phases. Most enhance homogeneously, however, larger masses, as in our case, can enhance heterogeneously possibly due to degeneration and necrosis. It has been reported that renal leiomyomas display low signal intensity on MRI for both T1- and T2-weighted images [8]. Surgical resection is the gold standard treatment for large, clinically significant renal leiomyomas; sometimes excision is possible with renal sparing operations [9,10]. Small, indolent leiomyomas of the kidney discovered incidentally often do not require treatment, and watchful waiting may be appropriate. The

Renal Leiomyomas are usually small benign neoplasms of well differentiated smooth muscle that rarely cause symptoms. When large and symptomatic, they appear regular, distinct and encapsulated in appearance on ultrasound and CT, hypoenhance with IV contrast relative to the renal parenchyma and display no evidence of macroscopic fat. 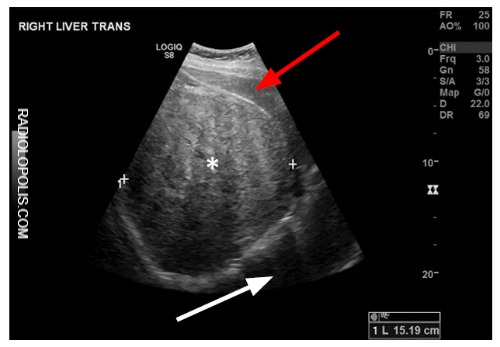 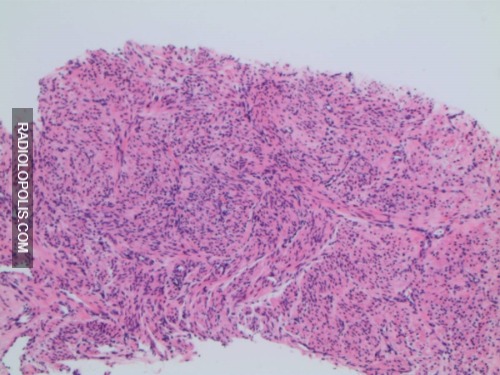 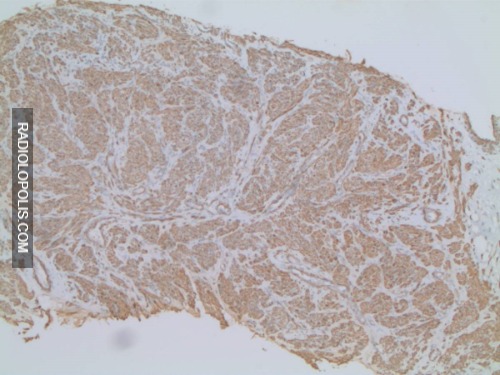 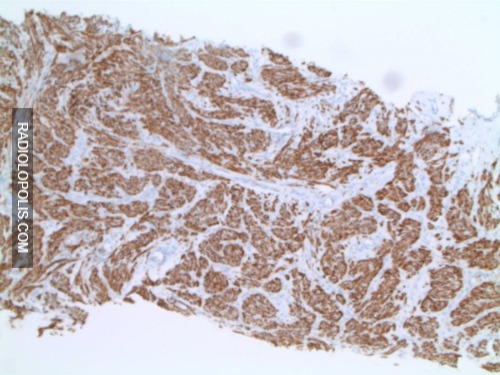 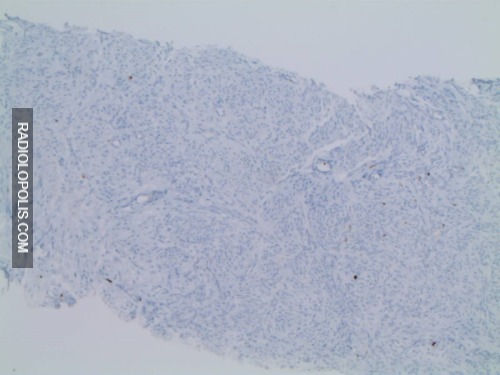 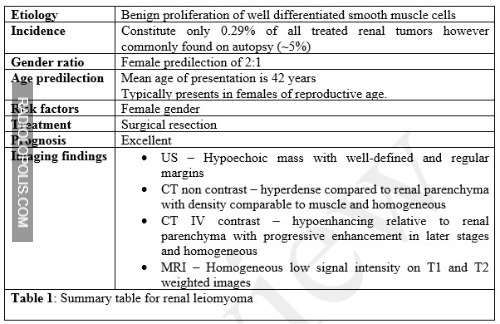 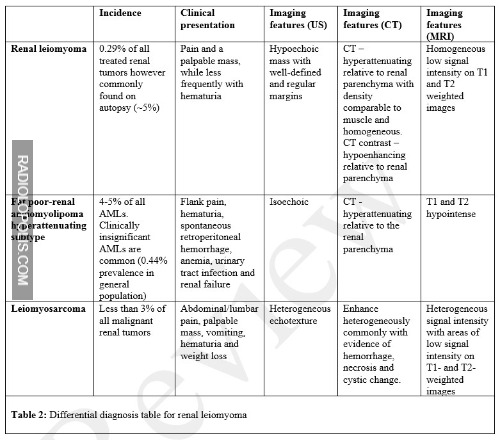