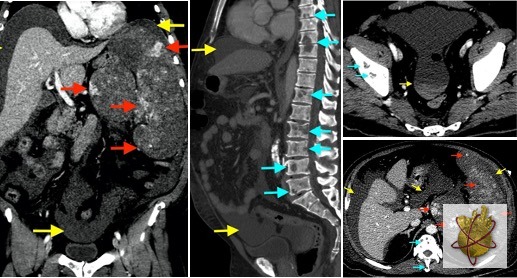 Primary splenic angiosarcoma with metastases to the liver and bone

A 69-year-old man presented to the ED (Emergency Department) by EMS (Emergency Medical Services) after experiencing an unwitnessed fall with an unknown period of loss of consciousness. The patient had a history of Usher syndrome leading to bilateral blindness and deafness, type 2 diabetes, and hyperlipidemia, but no known malignancy besides a remote history of basal cell carcinoma of the skin. He had also experienced recent exertional dyspnea, night sweats, peripheral edema, and thrombocytopenia which was being investigated by a hematologist and thought to be secondary to ITP (Idiopathic Thrombocytopenic Purpura). On arrival to the ED, he had left upper quadrant abdominal tenderness but was clinically stable.

A FAST (Focussed Assessment with Sonography for Trauma) scan showed free fluid in the pelvis. Subsequently, Computed Tomography (CT) scan of the abdomen and pelvis showed splenomegaly with multiple sites of focal arterial enhancement, hemoperitoneum, hypodense hepatic lesions, and lytic osseous disease (Figure 1). The differential diagnosis included lymphoma, metastases with associated splenic laceration/ pseudo-aneurysm. A splenectomy was performed to address ongoing bleeding, and to obtain a tissue sample for a pathological diagnosis. Pathology revealed splenomegaly with multiple hemorrhagic nodules that correlated with the sites of arterial enhancement on CT (Figure 2) and was consistent with a diagnosis of splenic angiosarcoma. The lytic osseous lesions and the liver lesions were presumed to be metastases.

Primary splenic tumours are rare and can be categorized into lymphoid neoplasms (derived from white pulp) and vascular neoplasms (derived from red pulp) [5]. Angiosarcoma is a vascular splenic neoplasm and the most common malignant tumour of non-hematopoietic origin with annual incidence of 0.14 to 0.25 cases per million [2, 5]. It is typically found in patients under 40 years of age [2, 6] and presents with splenomegaly, abdominal pain, and systemic symptoms such as fatigue, fever and weight loss [3, 4], often accompanied by cytopenias, leukocytosis and/or thrombocytosis [3]. As presented in the case above, it has been reported that 10% to 40% of patients with splenic angiosarcoma initially present with isolated thrombocytopenia because of hypersplenism or tumour-induced bone marrow fibrosis [2, 4]. Complications include splenic rupture leading to hemoperitoneum in up to 30% of patients, as seen in this case [3, 6]. Metastases are common and can involve different the liver, lungs, bone, bone marrow and the lymphatic system, among other sites [3, 6]. No clear etiology has been established, but it has been postulated that splenic angiosarcoma can be a product of the malignant transformation of benign splenic tumours including hemangioma, lymphangioma and hemangioendothelioma [2, 6]. Splenectomy is the current standard treatment [6]; However, patients have a poor prognosis as most have metastases at the time of presentation (2), and die within 6-12 months of diagnosis [3, 6]. Regarding imaging, ultrasound, CT and MR display an aggressive mass with associated splenomegaly [5, 6, 7]. On ultrasound, findings include a complex mass with heterogeneous echotexture and cystic areas reflecting necrosis and hemorrhage [5, 6, 7]. It is important to remember that in the early stages of the disease, ultrasound can be near normal, as in our case. Indeed, in our case, the patient had a normal ultrasound that mislead the hematologist to consider ITP as the cause of patient’s thrombocytopenia. CT can reveal an ill-defined mass with heterogeneous enhancement, hypoattenuating areas indicating necrosis, hyperattenuating areas indicating hemorrhage, with or without scattered calcifications [5, 6, 7, 8]. Less commonly, splenic angiosarcoma can present as multiple small enhancing splenic lesions instead of a large solitary mass. In addition, CT can reveal hypervascular metastases to the liver, lungs, bones and lymphatic system [5, 6, 7]. MR may show areas of hemorrhage and necrosis indicated by increased and decreased signal intensity on T1 and T2- weighted images [5, 6, 7]. Despite multiple imaging modalities, radiological diagnosis of splenic angiosarcoma is challenging due to overlap with other vascular splenic tumours including hemangiomas, lymphangiomas, hemangiopericytomas, littoral cell angiomas, epithelioid vascular tumours and splenic metastases [2]. Therefore, pathology is required for diagnosis. Gross pathological findings include ill-defined purple or re

Although splenic angiosarcoma is rare, it carries a poor prognosis so it is important to distinguish this entity from lymphoma and secondary metastases in the spleen. While radiological diagnosis is challenging due to overlapping features with other vascular splenic tumors including an ill-defined mass heterogenous enhancement, hypoattenuating areas indicating necrosis, hyperattenuating areas indicating hemorrhage and occasional calcifications, pathology is required for diagnosis. 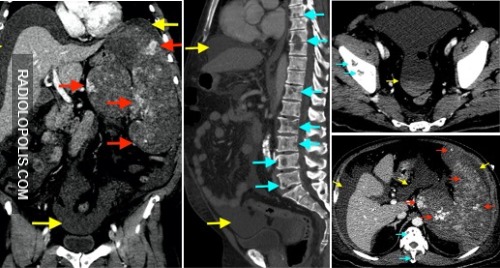